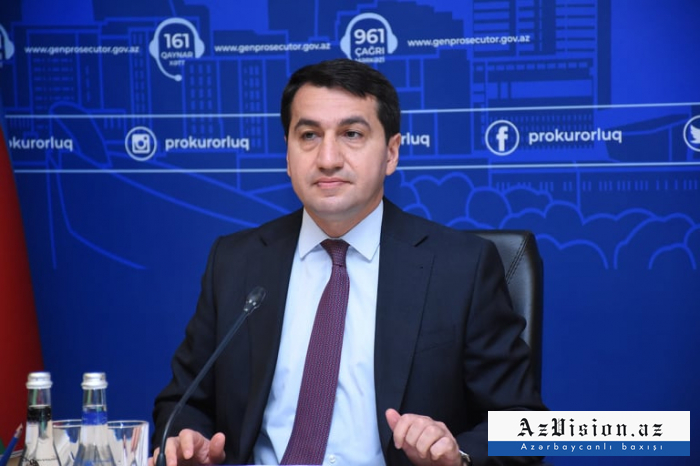 Azerbaijan always participates in the negotiation process over the resolution of the Armenia-Azerbaijan Nagorno-Karabakh conflict, said Hikmet Hajiyev, Assistant to the President of the Republic of Azerbaijan, Head of Foreign Policy Affairs Department of the Presidential Administration.

However, the negotiation process is always disrupted by Armenia, noted Hajiyev.

The official urged Armenia to put an end to its occupation policy.

“Everyone was already tired of negotiations for the sake of negotiations. The negotiation process must first and foremost be result-oriented in order to end the presence of the Armenian armed forces in the occupied Azerbaijani territories,” he added.

Hajiyev also underscored the need to ensure the fulfillment of the relevant UN resolutions.

He pointed out that Azerbaijan has always clearly and unambiguously expressed its constructiveness and position in the negotiation process.

“We believe that in the current conditions the international community should exert greater political and diplomatic pressure on Armenia so that Armenia would withdraw its troops from the occupied territories of Azerbaijan. President Ilham Aliyev spoke about all this in detail during his interviews with international TV channels,” the presidential aide concluded.