"At the moment, Turkey is not involved in the conflict" - President 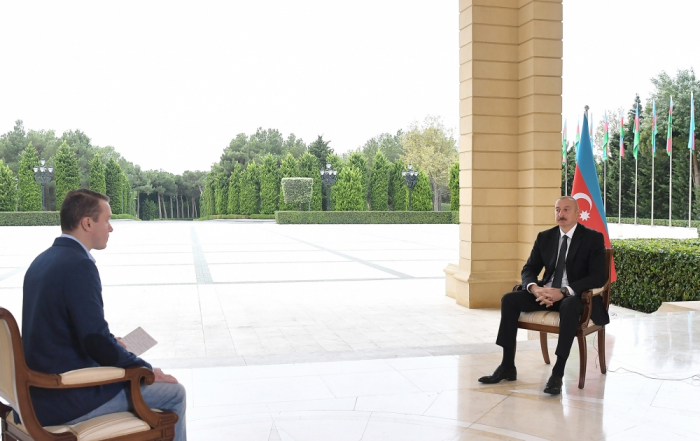 President of the Republic of Azerbaijan Ilham Aliyev made remarks in his interview to Russia's First Channel, while answering the reporter's question on "You call on Turkey to take part in the settlement of the Nagorno-Karabakh conflict. In your opinion, what should this participation be in terms of military or political efforts?"

Noting that Armenia is trying to involve the CSTO in this confrontation, the head of state said: "It is a failed attempt. He is trying to attract European countries. In essence, it is trying to internationalize the conflict. Subsequently, we express our position that such an approach is unacceptable. As for my statement on the involvement of Turkey, of course, I meant only a political settlement, a settlement in the post-conflict period. Despite various unsubstantiated rumoursç at the moment is not an involved party to the conflict. For example, both Russian and European media spread the news on alleged downing of Armenian Su-25 by Turkish F-16, but there is no evidence. It turned out that the Armenian pilot was simply not very professionally prepared and crashed it into a mountain. This kind of fake news is spreading. I do not know what is the purpose behind this. I may only assume, however, there's no basis for this fake news. Thus, when the phase of military confrontation is over, we will, of course, back to the negotiating table. "