"Calls made by OSCE co-chair countries are ineffective" - Ilham Aliyev 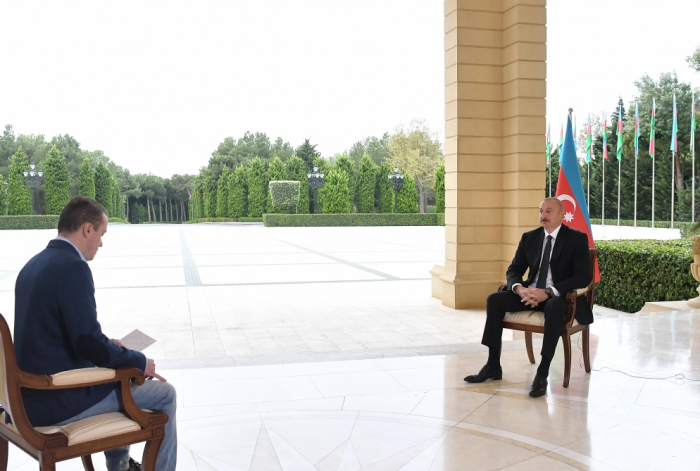 "For Azerbaijan and Armenia to sit at the negotiating table, the four resolutions of the UN Security Council adopted in 1993 when the Armenian armed forces occupied the territories of Azerbaijan, must be implemented. These resolutions send a very clear message to the aggressor. It states that the occupied territories must be returned immediately, unconditionally and completely."

President of the Republic of Azerbaijan Ilham Aliyev made remarks in his interview to Russia's First Channel, AzVision.az reports.

Reminding that 27 years have passed since the UN Security Council adopted relevant resolutions, the head of state said: "The Armenian side does not implement these resolutions, ignores them and tries to freeze the conflict for as long as possible. All the calls of the international community, including the co-chairs of the OSCE Minsk Group, on the unacceptability and change of the status quo, remain ineffective. Therefore, while the position of the Armenians is based on historical lies and violations of the norms and principles of international law, our position is based on the norms and principles of international law and historical justice. I am sure that as soon as the UN Security Council resolutions are implemented by Armenia and Armenia agrees to the withdrawal of its troops from the occupied territories, both sides can reach an agreement as soon as possible. This agreement will establish peace in the Caucasus".