NGOs send appeal to heads of Presidents of Russia, USA and France 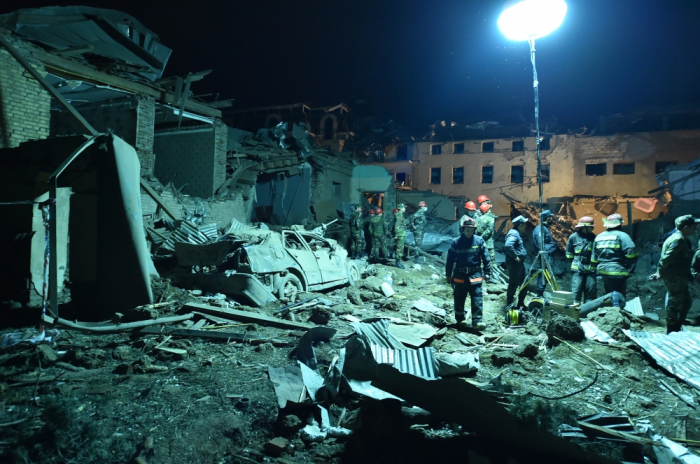 The NGOs of Azerbaijan sent an appeal to Vladimir Putin, President of the Russian Federation , Donald Trump, President of the United States of America  and  Emmanuel Macron, President of France regarding the killing of women and children as a result of the missile attack of Armenia on Ganja, AzVision.az reports.

We appeal to you as NGOs defending the rights of children and women in Azerbaijan.

After a meeting that lasted about 11 hours, an agreement was reached consisting of following 4 points:

1. To declare a ceasefire for humanitarian purposes starting from 12 p.m. on October 10 for the exchange of the prisoners of war, other people detained and bodies of those killed, with the mediation and in accordance with the criteria of the International Committee of the Red Cross;

2. Further parameters of the ceasefire will be agreed upon additionally;

3. The Republic of Armenia and the Republic of Azerbaijan, with the mediation of the OSCE Minsk Group Co-Chairs, on the basis of the fundamental principles of the settlement, are launching substantive negotiations with the aim of achieving early peaceful resolution;

4. The sides reiterate the inalterability of the format of the peace process.

However, unfortunately, the Armenian side, in violation of all the provisions of the agreement signed, in accordance with its hypocritical and aggressive nature, continues to subject the frontline regions and villages, as well as the cities of Azerbaijan situated far away from the conflict zone, to heavy artillery and missile fire, grossly violating the ceasefire agreement.

The most regrettable is that on October 11, at around 4 AM, the second largest city of Azerbaijan with a population of more than 500,000 people, located 80 km from the front line, was shelled by the political-military leadership od Armenia.

As a result of this barbaric and atrocious attack of Armenia, 3 residential buildings were destroyed, more than 7 civilians were killed and more than 33 were injured. Among the dead were children and women. This crime of Armenia is another act of genocide after Khojaly committed against peaceful and innocent Azerbaijanis.

Armenia's open attack on the civilian population of Azerbaijan after the ceasefire’s entering into force, as well as the killing and wounding of dozens of people is an unprecedented baseness and crime. With this criminal act, Armenia has once again proved that it has never complied with the agreements reached and the documents it signed. On the other hand, Armenia's rocket fire on Ganja also shows that the occupying country, as in previous years, still ignores your position and call of the world community, specifically the co-chairs, continuing to grossly violate all international conventions. The only reason for this is that Armenia has so far gone unpunished and no international sanctions have been imposed on the occupying country.

We, the undersigned NGOs working for the protection of children's and women's rights, call on you and the civil society institutions of your countries to take serious steps against Armenia, which hypocritically violated the ceasefire and killed many innocent children and women, and stop the aggressor.

You, the countries responsible for resolution of the conflict, cannot remain indifferent to the fact that Armenia has committed such a gross and blatant war crime in front of the whole world. Your indifference to this aggression against Azerbaijan will be assessed as your open disrespect for human values, international obligations and international humanitarian law.

We hope that the public of the United States, the Russian Federation and France will also strongly condemn this crime against humanity committed by Armenia and demand that their countries’ leaders punish Armenia.

Note: Please find enclosed the photographs of the destruction caused by the October 11 missile attack of Armenia.

2. "Integration of children and youth with disabilities in sports" PU, Mammadova Aynur;

25. Public Union for Support of Children and Youth "For Justice and Development", Nurana Karimova;

37. "Assistance to children in need of special care and their families" PU, Karimova Jamila;

40. “Buta” PU for Support of Children and Adolescents with Special Needs, Agamali Gunay;

47. "Association for the Development of Women's Entrepreneurship in Azerbaijan" PU, Babayeva Sakina;

62. Women Public Union for the Development of Municipalities, Khalilova Lyudmila;

69. PU for the Promotion of Armenian Aggression, Sariya Jafarova;