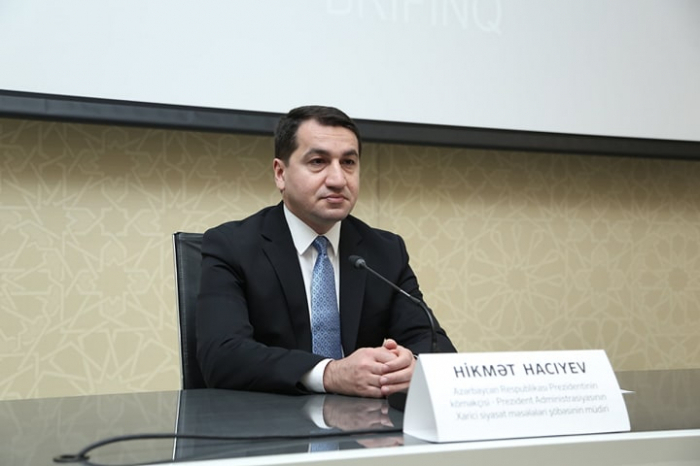 Azerbaijan will take retaliatory measures in line with international law if Armenia continues its aggressive actions, said Hikmet Hajiyev, Assistant to the President of Azerbaijan, Head of Foreign Policy Affairs Department of the Presidential Administration.

Hajiyev made the remarks at a briefing held Sunday for foreign military attachés and representatives of international organizations (UN, EU, ICRC) in Azerbaijan, AzVision.az reports.

He noted that today Armenia launched a missile attack against Azerbaijan’s Ganja city, which is far from the contact line.

“Armenia shelled Ganja from Vardenis region. Ganja is a densely populated city. As a result of the Armenian attack, there are dead and injured among civilians. Armenia used the Tochka-U missile system, which is very destructive,” Hajiyev said.

The presidential aide stressed that firing such a missile at a densely populated area was aimed at killing a large number of people.

He said the Armenian army is also using Smerch and Skad missiles against Azerbaijani cities.

Hajiyev noted that Armenia’s actions run contrary to the ceasefire agreed in Moscow.

“Azerbaijan observed the humanitarian truce, but Armenia committed an act of vandalism against the civilian population. International organizations should exert political pressure on Armenia. Armenia is currently acquiring new weapons via both the black market and civilian aircraft. It completely contradicts the international rules of civil aviation,” he said.