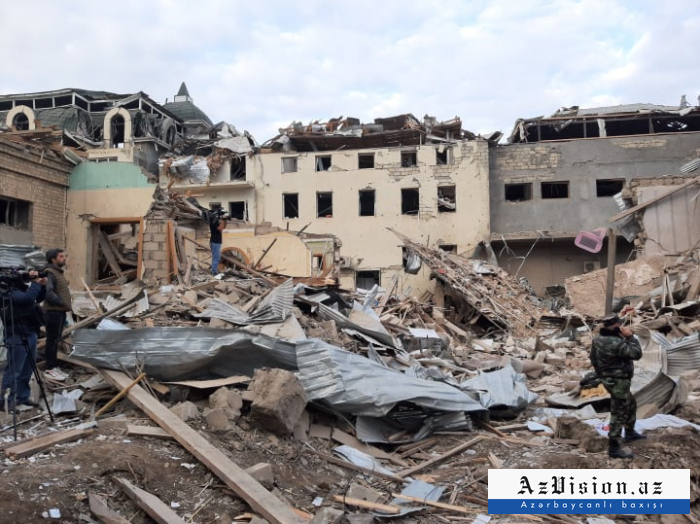 After the Armenian armed forces attacked an apartment building in the center of Azerbaijan’s Ganja city, the employees of the rescue service of the Azerbaijani Ministry of Emergency Situations were immediately brought to the scene, Azerbaijani Deputy Minister, Lieutenant General Rahim Latifov told reporters on Oct. 12.

The deputy minister stressed that three 31-apartment buildings were completely destroyed as a result of Armenia’s missile attacks, four houses and one private house are under the threat of collapse.

At the same time, commercial facilities and residential buildings near these buildings were also damaged.

Some 205 people were living in 95 apartments, including these seven buildings and one private house. Nine bodies and 17 wounded were recovered from the rubble. Some 35 civilians were injured.

“After clarifying the list of residents living in houses together with representatives of the local executive bodies and revealing that there was no one under the rubble, search and rescue operations were stopped," Latifov said.

On October 11, 2020, at about 2:00 (GMT+4) Armenian armed forces fired missiles at multi-apartment residential buildings in the central part of Ganja, the second largest city of Azerbaijan, located outside the frontline zone.

According to the latest data, 9 civilians, including 4 women, were killed as a result of missiles fired at apartment buildings in the central part of Ganja.

The Armenian Armed Forces, flagrantly violating norms and principles of international law, the Geneva Conventions of 1949 and Additional Protocols to it, as well as the requirements of the humanitarian ceasefire declared on October 10th, continue to deliberately target the civilian population of Azerbaijan, and intensively bombard densely populated settlements.