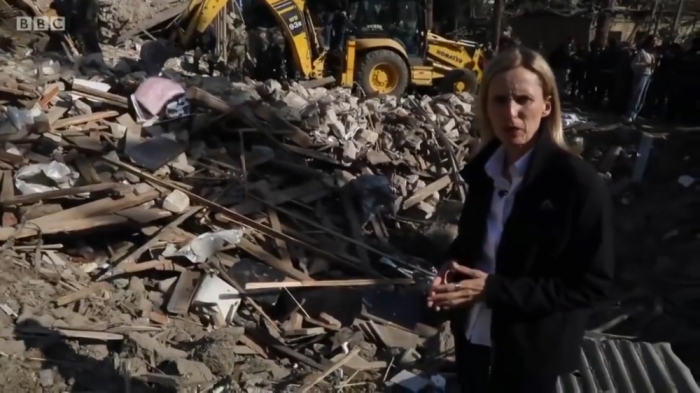 The BBC broadcasted a reportage on the Armenian missile attack on Ganja highlighting that the civilians were the main target of that attack, AzVision.az reports.

“The ceasefire reached between Armenia and Azerbaijan was breached within the first 24 hours. It is noted that after the shelling of a residential building in Ganja, Azerbaijan claims that Armenia has committed a war crime”, BBC’s correspondent said.

The reportage presents the footage of houses destroyed by the Armenian missile attack and people who lost their loved ones. A BBC correspondent at the scene showed the wreckage and said, "Here is what’s left of the neighbourhood in Ganja, Azerbaijan’s second-largest city far from the frontline. There are no signs of military targets. We saw the remnants of the ballistic missile. It was clearly civilian target- apartment blocks, flats where people were living. There are beds and blankets strewn among the rubbles. The attack happened at 2 am."

This was supposed to be a ceasefire, but it looks like a real war. What happens next? Is there worse to come?, says the reportage.

“If Armenia continues to attack Azerbaijani civilians, Azerbaijan will be obliged to take necessary measures against illegitimate military targets”,  Azerbaijani President's Aide, Hikmet Hajiyev said while answering the question whether the ceasefire was dead.

Hikmet Hajiyev also commented on the continuation of the ceasefire highlighting that Azerbaijan tries to stick to the ceasefire but if Armenia continues attacking Azerbaijani civilians, as every nation, they have the right for self-defence.