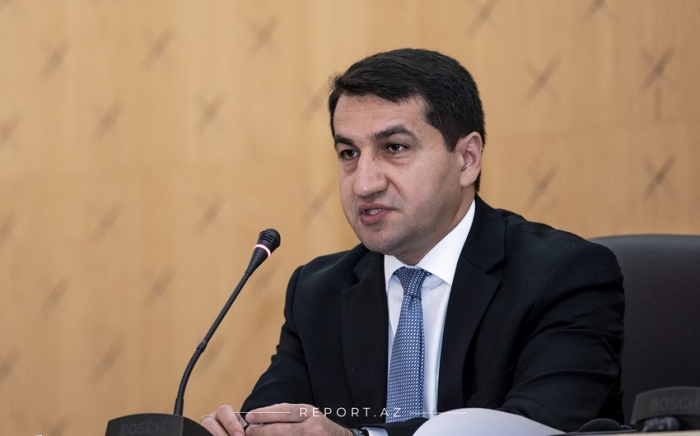 The Armenian Armed Forces continue to attack Azerbaijani cities with missiles and artilleries from its territories under the guise of a humanitarian ceasefire, said Head of the Department of Foreign Policy Affairs of the Presidential Administration of Azerbaijan Hikmet Hajiyev.

"Armenia is trying to expand the geography of the conflict and involve third parties in the conflict. Azerbaijan has no military targets in Armenia. On October 11, a SCUD ballistic missile was fired from Armenia into the densely populated area of ​​Ganja, Azerbaijan's second-largest city. The use of a highly destructive missile against civilians outside the war zone is the first case in the OSCE area and one of the rarest in recent military conflicts around the world", Azerbaijani President's Assistant stated.

Hikmet Hajiyev also commented on the attempts of the Armenian Army to kill Azerbaijani civilians: "Armenia's operational-tactical ballistic missile systems were put into operation this morning and re-targeted Ganja, Mingachevir and other cities of Azerbaijan. The Azerbaijani Army neutralized these legitimate military targets with a preemptive strike to save the Azerbaijani civilians’ lives. The Armenian Defense Ministry itself was forced to admit that these missiles were brought to combat readiness".

"The city of Terter and the villages of Aghdam have been under fire since 07.00 this morning. One person was killed. As a result of a shell falling on the yard of secondary school in Duyerli village, 8 civilians were injured. More than 100 shells were fired. Among the injured are members of the film crew of the Azerbaijan State Television", Hajiyev noted.

He also highlighted that Azerbaijan is committed to a humanitarian ceasefire stating that if Armenia conducts missile and other attacks on Azerbaijani military and civilian objects and civilians from the territory of Armenia, Azerbaijan reserves the right to neutralize them as legitimate military targets.