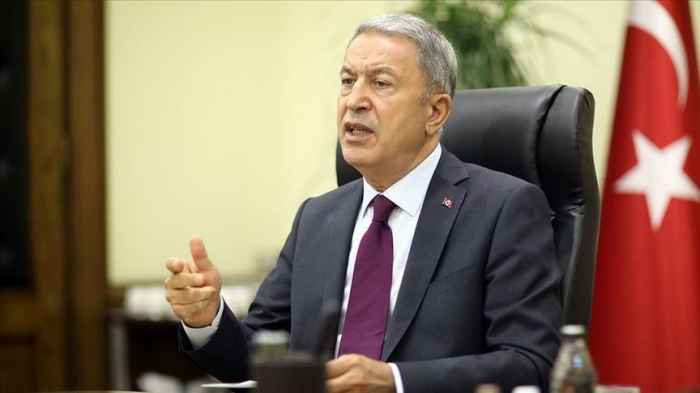 History will never forgive those who remain silent over Armenia’s brutality and war crimes against Azerbaijani civilians, Turkey’s defense minister said on Saturday.

“Those who call for cease-fire and negotiations are now watching from afar as Armenia continues to commit war crimes,” Akar said.

Slamming Armenia’s missile attack on Azerbaijani civilians in the city of Ganja, he said: “Armenia again massacred our Azerbaijani brothers and sisters, including children, women and elderly.”

“Those who order the attacks on civilians with ballistic missiles will definitely be held accountable, and history will never forgive those who remain silent over this brutality.”

“We will continue to stand by our Azerbaijani Turkic brothers and sisters in the struggle to preserve their territorial integrity and regain their territories, and to support them with all our means in their just cause,” Akar said.

The minister congratulated Azerbaijan on the liberation of Fuzuli city and the downing of “two [Armenian] SU-25 fighter jets.”

Akar wished Allah’s mercy for the Azerbaijanis martyred in Armenian attacks and prayed for the fast recovery of the wounded, the statement said.

“Armenia, having run away from the Heroic Army of Azerbaijan on the front line, once again hit civilian settlements in Ganja with missiles in cowardly fashion. Brotherly Azerbaijan is responding to this heinous act, on the front lines,” the ministry said.

It said the Armenian army is “in great despair” and committing a “new crime against humanity” every day.

“Those who remain silent to such massacres will take their place in the tainted pages of history. We wish Allah’s mercy upon our martyrs and swift recovery to our injured brothers and sisters,” read the tweet.

More than 20 houses were also destroyed, according to preliminary reports.

It was Armenia’s second deadly assault in less than a week on Ganja, an area far from the front line with a population of half a million.

Since new clashes erupted between the two countries on Sept. 27, Armenia has continued its attacks on civilians and Azerbaijani forces.

As of midday Saturday, Armenia has killed at least 60 Azerbaijani civilians and injured 270 more since Sept. 27, according to Azerbaijani officials.

The number of houses damaged in Armenian attacks has reached 1,704, along with 90 residential buildings and 327 civil facilities, according to Azerbaijan’s Prosecutor General's Office.

Relations between the two former Soviet republics have been tense since 1991, when the Armenian military occupied Upper Karabakh, or Nagorno-Karabakh, an internationally recognized territory of Azerbaijan.

Some 20% of Azerbaijan's territory has remained under illegal Armenian occupation for nearly three decades.

The OSCE Minsk Group -- co-chaired by France, Russia, and the US -- was formed in 1992 to find a peaceful solution to the conflict, but to no avail. A cease-fire, however, was agreed to in 1994.

Multiple UN resolutions, as well as international organizations, demand the withdrawal of the occupying forces.

World powers, including Russia, France, and the US, have urged a new cease-fire.

Turkey has supported Baku’s right to self-defense and demanded the withdrawal of Armenia's occupying forces.