Armenia demonstrated disrespect for mediators and its own commitments - President Aliyev 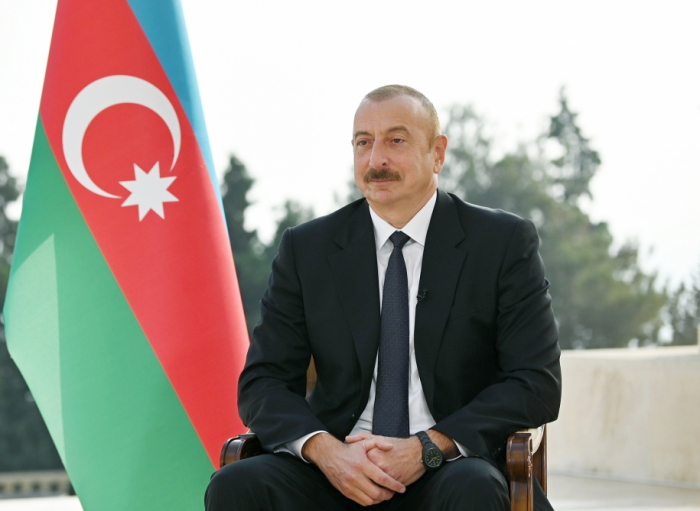 "We remain true to the commitments within the framework of contacts with our partners. From the very beginning and in the process of negotiations on the settlement of the conflict, we have always relied on international law, on our adherence to the resolution of the conflict by peaceful means, including the commitments Azerbaijan took upon itself after the talks in Moscow, which we aspired to and were going to implement," President Ilham Aliyev said in an interview with Russia's TASS news agency in response to a question about the ceasefire, AzVision.az reports.

Noting that Armenia had flagrantly violated the ceasefire, the head of state said, "Less than 24 hours after the talks, the city of Ganja was attacked. Residential areas of the sleeping city of Ganja were targeted deliberately. After the first attack – and there were two of them – the death toll was very high. In other words, Armenia violated the ceasefire in a defiant manner. Thus, it demonstrated disrespect for mediators, disrespect for the commitments it had assumed after such long negotiations in Moscow."

The President of Azerbaijan noted that Armenia had also violated the ceasefire on the battlefield earlier, after the terms of the ceasefire for the exchange of bodies, prisoners and hostages had been agreed. However, they were not satisfied with this and attacked the city of Ganja. "Two days ago, they did the same and again at night. This is a very heinous crime. This is international terrorism. The unanimous condemnation of this bloody crime by the world community means that they will not get away with it. The UN Secretary General, the European Union and many countries at the national level have condemned this act of international terrorism," President Ilham Aliyev said.