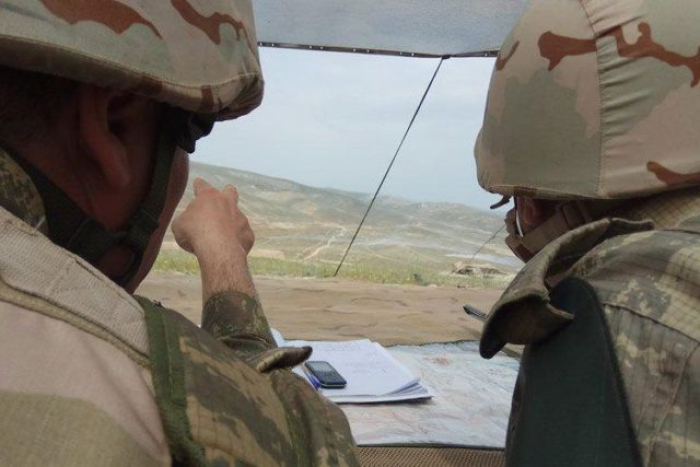 On the morning of September 27, Azerbaijan’s Ministry of Defense announced that Armenian forces in the occupied territories of Azerbaijan had attempted to attack Azerbaijani the positions; in response, Baku launched a large-scale counter-offensive up and down the Line of Contact (LoC) in Karabakh. Within the initial 24 hours of military operations, the Azerbaijani military said it liberated six villages in the Fuzuli and Jabrail districts, located on the southern flank of the frontline (Report.az, September 27).

From the opening days of the renewed clashes, it became clear that the Azerbaijani counter-offensive would proceed in two main directions—north and south. Along the northern frontline, Azerbaijan’s forces consist mainly of the 1st Army Corps, headed by Major General Hikmat Hasanov (Azvision.az, October 4). In the south, operations are conducted by units headed by Major Genral Mais Barkhudarov (Azxeber.az, September 28). Both of these commanders belong to a younger generation (compared to generals educated in the Soviet Union), born in the occupied territories of Azerbaijan and forced to flee their homes when they were quite young.

The positions of the Armenian forces in northern Karabakh, in the area north of Aghdere (Mardakert), has colossal strategic importance for Armenia. It is extremely mountainous terrain and has been built up with extensive Armenian defense infrastructure over the past two few decades, leaving narrow space for offensive operations by an attacker. In contrast, the plains surrounding Karabakh’s southern flank allow for a wider field of maneuver.

After breaking through the deeply echeloned defensive areas of the Armenian Armed Forces in the north (Talish, Suqovushan and Murov) and south, the Azerbaijani military is now gradually advancing toward the geographic and political center of occupied Karabakh—the capital of Khankendi (Stepanekert in Armenian) and Shusha, a site of great cultural-religious importance to Azerbaijanis. Arguably, the necessary prerequisites for the present-day Azerbaijani operations were established as a consequence of the April 2016 Four Day War (see EDM, April 6, 2016 and July 25, 2018), when Azerbaijan successfully seized control of the strategic heights of Talish in the north and Leletepe in the south.

To date, there have not been any significant moves along the middle portion of the frontline, which crosses the occupied district of Aghdam. However, both sides continue to exchange artillery strikes in this area. Baku asserts that the Azerbaijani army’s strikes target legitimate military objects, since the extensively mined and strongly fortified Aghdam provides Armenian forces with necessary strategic depth for defense. The Armenian military, on the other hand, has been heavily shelling densely residential villages in the neighboring Terter, Barda, Aghjabadi and Goranboy districts, in addition to other locations, causing significant human causalities, according to the Prosecutor General’s Office of Azerbaijan (Genprosecutor.gov.az, October 16).

Azerbaijani advances on Karabakh’s flanks have been methodical and unrelenting. After successfully breaking through Armenian occupying forces’ defensive lines on September 27, the Azerbaijani army seized control of seven villages on October 3, ten more villages the following day, and four villages in the Terter and Jabrail districts by October 5 (Baku.ws, October 14). Ministry of Defense videos posted online show that through October 9, Azerbaijani units were using artillery strikes and drones to tear down Armenian military capabilities and supply chains near and deeply behind the latter’s defensive lines ( YouTube, October 3). Azerbaijan already tested the effectiveness of Israeli-made drones during the 2016 Four Day War (see EDM, May 11, 2016); and it has since then significantly enriched its stockpiles with Turkish Bayraktar drones (see EDM, October 15, 2020). Widely disseminated footage of tanks and other armored vehicles being devastated by drone airstrikes are already raising questions about the relevance of existing modern military doctrines around the world (Army Times, October 12). According to Azerbaijan’s estimates, since the start of the current clashes, the Azerbaijani military destroyed more than 200 Armenian tanks, 35 Osa anti-aircraft systems, 1 TOR air-defense system, 3 expensive S-300 air-defense systems ( YouTube , October 17), 16 command centers and about 170 trucks. Thirty-three tanks were captured in good condition to be repurposed. So far, Armenia’s battlefield losses total around $2 billion, according to officials in Baku (APA, October 16). Baku refuses to release figures on its own military losses. 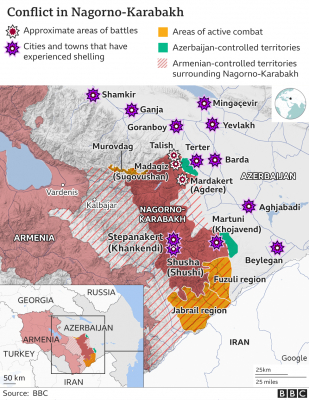 After Azerbaijani units broke through Armenia’s multi-layer defensive lines (YouTube, March 17) in the occupied territories’ southern flank and began to advance north and westward, the Armenian army sought to deter further moves by launching missile attacks against multiple cities and critical infrastructure in Azerbaijan located far from the frontline and devoid of military significance (EurActiv, October 16; Caspian News, July 22). Densely populated neighborhoods in the city of Ganja were hit three times by missile attacks from the territory of Armenia, on consecutive Sundays (October 4, 11) and in the wee-morning hours of Saturday, October 17 (Report.az, October 17). As result of these attacks, 23 residents of Ganja were killed, including infants, children and women, and 82 sustained injuries.

On October 10, in Moscow, Russian Foreign Minister Sergei Lavrov mediated talks between his counterparts from Armenia and Azerbaijan, Zohrab Mnatsakanyan and Jeyhun Bayramov, respectively. Following ten hours of negotiations, Lavrov announced a temporary, humanitarian ceasefire, the terms of which were broken almost immediately (see EDM, October 13). The day before, Azerbaijani President Ilham Aliyev announced the liberation of eight villages in the Fuzuli, Terter, Jabrail and Khojavend districts. Among the most strategic was the Hadrut settlement, control of which opens the way to Shusha. But Armenian military officials denied this fact for three or four days. This likely explains why the terms of the truce were not adhered to: Armenia may have been desperately trying to retake this settlement before Azerbaijan’s battlefield gains could solidify into a fait accompli ( YouTube , October 15).

Following the full resumption of military operations, President Aliyev announced the liberation of dozens of villages on Karabakh’s southern flank, thus signaling that the Armenian units there were collapsing. In the early morning of October 17, Armenia launched its latest missile attack on Ganja, but several hours later President Aliyev declared the liberation of the city of Fuzuli, which has strategic importance for enabling Azerbaijani advances north into Karabakh ( YouTube , October 17).

Armenia and Azerbaijan agreed to temporarily pause the fighting that same day. Yet it is unclear how long the current truce will last or whether, having suffered major losses of held territory inside Azerbaijan, Yerevan will agree to withdraw its occupying forces in accordance with strict timelines, as demanded by Baku. It is already clear that without an end to the occupation and a substantive resolution of the conflict, no ceasefire agreement is likely to be sustainable.