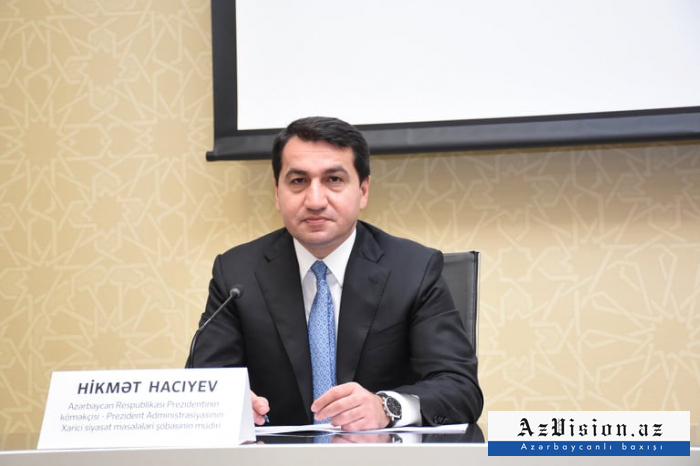 The Armenian prime minister’s latest statement once again testifies that Yerevan is absolutely uninterested in resolving the Armenia-Azerbaijan Nagorno-Karabakh conflict through negotiations, said Hikmet Hajiyev, Assistant to the President of Azerbaijan, Head of Foreign Policy Affairs Department of the Presidential Administration.

Hajiyev made the remarks Wednesday commenting on Armenian PM Nikol Pashinyan’s statement that “there is no diplomatic solution to the Nagorno-Karabakh conflict”, AzVision.az reports.

"With this statement, the Armenian leadership once again admits its goal to continue the occupation of Azerbaijani territories. This once again confirms that Yerevan’s statements on a negotiated resolution of the conflict are nothing but hypocrisy," the presidential aide said.

Haiyev pointed out that Armenia’s prime minister acting irresponsibly and for the sake of his own political ambitions calls on all civilian authorities, civilian population for total armament and engages them into military operations.

“This official position of Armenia clearly proves which side is violating the humanitarian ceasefire and serves to further escalate the situation in the region,” Hajiyev added. “Such statements by the person, who ordered the constant shelling of Azerbaijan’s Ganja city from SCUD ballistic missiles, the population of other cities and districts from missile launchers and heavy weapons, are nut surprising.”

Hajiyev said the Armenian PM made this statement immediately after Russian-initiated working visit of the foreign ministers of the two countries to Moscow and before the meeting at the level of foreign ministers which is supposed to be held in Washington at the initiative of the United States.

“In his recent interviews and statements made to the international media, President Ilham Aliyev has repeatedly stated Azerbaijan's readiness for negotiations and finding a diplomatic solution to the conflict. The international community, especially the OSCE Minsk Group co-chairs, must draw conclusions from this statement by the Armenian leadership, against the background of Azerbaijan's constructive position on the settlement of the conflict. This statement by the Armenian leadership is also disrespectful to the steps taken by the international community to resolve the conflict in a diplomatic way,” Hajiyev added.

The presidential aide stressed that in accordance with the existing road map, the Republic of Azerbaijan supports the settlement of the conflict through negotiations based on the UN Security Council resolutions.