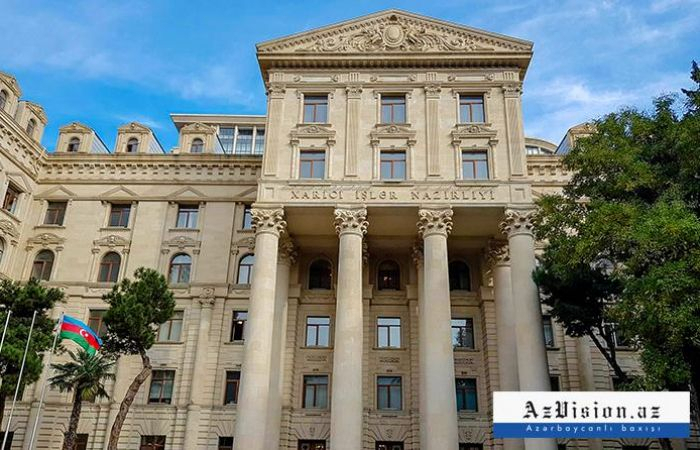 With his latest remarks, Armenian Prime Minister Nikol Pashinyan openly admitted that Armenia continues its occupation policy, and the country’s current leadership is disinterested in resolving the Nagorno-Karabakh conflict through negotiations, the Azerbaijani Foreign Ministry said in a statement on Wednesday.

The statement came after Pashinyan’s remarks that “there is no diplomatic solution to the conflict”.

"The real intention of Armenia, which has been repeatedly entreating for a ceasefire as a result of counter-offensive measures of Azerbaijan in response to the new Armenian attack and the liberation of the territories by the Azerbaijani Armed Forces, and grossly violating the truce after the humanitarian ceasefire agreements were declared twice, as it is clearly seen from the mentioned statement of the Prime Minister, is not to achieve peace, but rather to resort to a new occupation.

This statement, which undermined the efforts of the mediating countries to observe the humanitarian ceasefire, the consultations held with the foreign ministers in Moscow, as well as diplomatic efforts in the run-up to the forthcoming meetings in Washington is another clear example in a long line of destructive stance by aggressor Armenia.

Demonstrating goodwill and constructiveness, the Azerbaijani side, in its turn, agreed to humanitarian ceasefire twice and stated its support for a negotiated settlement of the conflict on the basis of UN Security Council resolutions. As such, we call on countries that show the same approach to Armenia, the aggressor state, which is not interested in the diplomatic solution of the conflict and Azerbaijan whose territories have been under occupation for almost 30 years and supports the political solution of the conflict within the framework of international law and UN resolutions, to draw the appropriate conclusions.

The Armenian leadership, which does not feel any pressure by the international community and has not been subject to liability for its various crimes as part of its policy of aggression against Azerbaijan, is dragging its people into the abyss with its irresponsible statements and actions.

The only way to achieve a sustainable solution to the conflict and de-escalate the tension in the region is through ensuring the rule of international law, the inviolability of internationally recognized borders and respect for them".