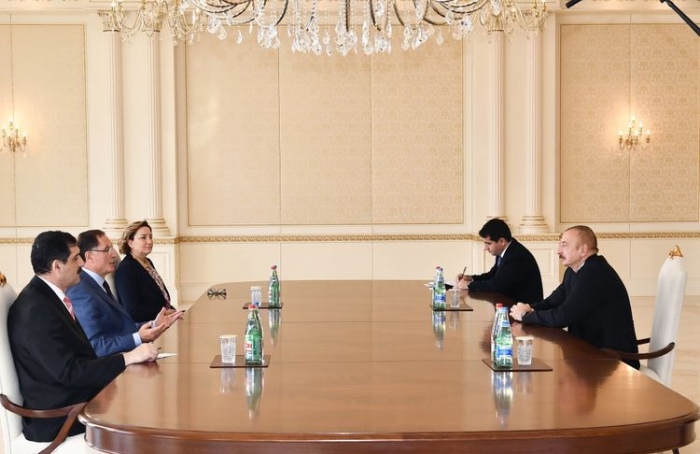 President Ilham Aliyev: I am pleased to welcome you. In the current situation, your presence in Azerbaijan is of particular importance. As you know, Armenia has committed yet another act of aggression against Azerbaijan, another act of terrorism. It has committed war crimes against both our civilians and our servicemen. I know that you will go to Ganja during this visit. You will see for yourself what savage enemy we are facing. They cannot confront us on the battlefield and try to make up for this bitter defeat by shelling civilians. Two cowardly attacks on Ganja and the hitting of Ganja with ballistic missiles are war crimes. The Armenian leadership will be held accountable for this crime. This is a deliberate crime. They specifically targeted the civilian population. As you know, we have many casualties, including children, women and the elderly. This once again shows the predatory nature of Armenian fascism. This shows once again that by breaking the back of Armenian fascism, we will save our region from great troubles and great tragedies.

At the same time, all our frontline towns and villages come under fire every day. According to the information provided to me today, 190 shells hit Tartar district alone from 6 to 8 o’clock in the morning. More than 90 shells hit Aghdam district. There have been days when 2,000 shells landed in Tartar district. So they want to destroy our cities, they want to break the will of the Azerbaijani people. But they fail and become even more depraved. We take our revenge on the battlefield. We have never taken and will never take any action against civilians. Although they are firing on our ancient historical city of Ganja, we are not and will not fire on Armenian cities or the cities of Nagorno-Karabakh. Our superiority is manifested further through these moral values and shows the whole world again that Armenia poses a huge threat to the world. The criminal and fascist regime in Armenia is the biggest threat to our region, and Azerbaijan is doing its best to eliminate this threat. Good news comes from the frontline every day. We liberate new cities and villages from occupiers every day. The victorious Azerbaijani Army is fulfilling its glorious mission.

Your visit to Azerbaijan today is of great importance. As you know, brotherly Turkey has supported us from the first hours. Dear President Recep Tayyip Erdogan, my dear brother said from the first hours that Turkey stands by Azerbaijan. Other high-ranking Turkish officials have made similar statements. The Turkish people support us. The conflict is widely covered in the Turkish media. Azerbaijan's legitimate case is communicated to the world through the Turkish media. This is also very important. Unfortunately, the media of many countries unilaterally side with Armenia. This is a great injustice. This is fraud. This is a distortion of events. Attempts to portray Azerbaijan as an aggressor or occupier have no basis, of course. Therefore, the presence of Turkish media here from the first days and their reports from the war zone serve to provide accurate information on this issue to the world.

Also, we have been proving to the international community over the years, and I think we have been able to prove that, we are right and that we have been invaded. The footage of our liberated cities and villages shows what savages we are facing. There is not a single surviving building in these cities, in these villages, in most of them. The city of Fuzuli has been completely destroyed. We could not find a safe building to raise the Azerbaijani flag there, but this ceremony was held at last. The buildings of all our villages have been destroyed, our mosques have been destroyed. The whole world saw images of a destroyed mosque in a village in Zangilan on the Internet yesterday. They kept pigs in that mosque. They have insulted our mosques. They have destroyed all our historical sites. There are only stones left of houses. All roofs, windows and belongings have been looted.

Unfortunately, they invaded our lands with foreign support in the early 1990s. In the current situation too, we see that they are receiving help from abroad. Mercenaries are sent there. A lot of weaponry is sent there. Nevertheless, we are breaking the back of this ugly regime. We continue our just cause. We have a brotherly country such as Turkey by our side. We are always together. Thank you again and welcome!

- Good to see you, Mr. President. Thank you very much for taking the time to receive us despite your busy schedule. Thank you!

Azerbaijani lands have been under occupation for 30 years. Despite all the negotiations, there has been no progress for 30 years. This is why the struggle you are waging today is fair, it is a struggle for law, a struggle in the field of human rights – to drive the occupiers out of your homeland. This is the most natural and legitimate right of international law, of human conscience and human morality. You do it extraordinarily well.

Your statements every evening about how many villages and cities have been liberated from occupation bring joy and happiness to people all over Turkey.

As the Ombudsman of Turkey, I also chair the Organization of Islamic Countries (OIC) Ombudsmen Association.