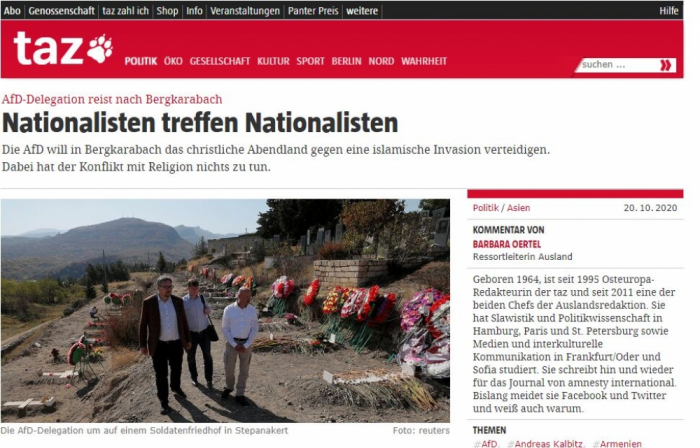 The AfD wants to defend the Christian West against an Islamic invasion in Nagorno-Karabakh but the conflict has nothing to do with religion, says the article "Nationalists meet nationalists" published in Taz.de news portal.

The article is particularly focused on the visit of the delegation of the AfD party to Azerbaijan's occupied territories in Nagorno-Karabakh.

AzVision.az presents the article below:

"It couldn't be more cynical. There are daily casualties in the fighting between Armenia and Azerbaijan. Nobody knows how many more lives this madness will cost and how many people it will turn into refugees. And the AfD? It has nothing better to do than send a delegation to the Nagorno-Karabakh region - ostensibly to defend the Christian West against Islamic invaders.

Such a positioning is under-complex, but that has always been part of the brand essence of the AfD. Because the decades-old conflict that broke out again at the end of September is not a fight between Christian Armenians and Muslim Azerbaijanis. A look at the history books would be enough to get clarity on this point: Basically, it is about borders and territories; the conflict is a legacy of the Soviet era.

The Armenian government would do well not to succumb to the temptation to exploit the visit of these German parliamentarians for their own propaganda purposes. Because the company is ready to stir up even more hatred - in a region that has to find a way to continue living together."