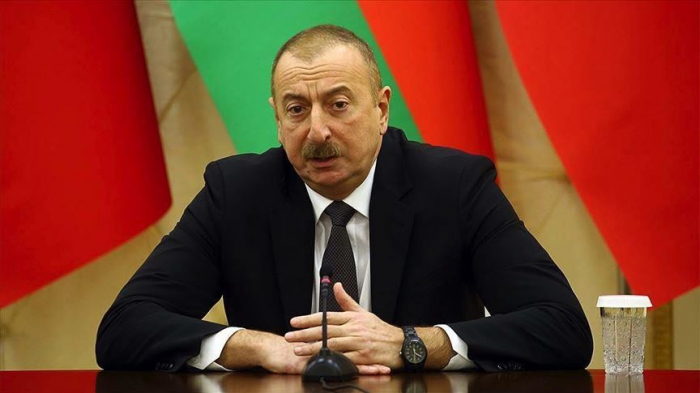 Azerbaijan agreed on a fresh humanitarian cease-fire to exchange prisoners and bodies, but Armenia broke the truce only minutes after it was supposed to take effect, the President of Azerbaijan Ilham Aliyev said on October 26.

President Ilham Aliyev stressed that those who want an Armenia-Azerbaijan humanitarian cease-fire are sending weapons to Armenia.

"I have the list. Why would anyone who wants a cease-fire would send weapons?" he asked.

Referring to those supporting Armenia, Aliyev said: "If you want to save the Armenian state, tell them to leave our lands. They will go out with a word of yours."

Azerbaijan on Monday said the Armenian forces continued its attacks on Azerbaijani civilian settlements and military units, despite the fresh humanitarian cease-fire in Nagorno-Karabakh.

The villages of the Aghdam region, as well as the city of Tartar and its surrounding villages are subject to heavy shelling, Azerbaijan's Defense Ministry said in a statement.

The ministry added that the Armenian forces also opened fired on Tovuz, Gadabay, and Dashkesan regions of Azerbaijan from the Berd, Chambarak, and Vardenis regions of Armenia.

The positions of the Azerbaijani units in Tartar, Aghdam, Fuzuli, Lachin, and Gubadli also came under attack, it said.

The US-brokered new temporary humanitarian truce between Azerbaijan and Armenia was announced Sunday and came into effect as of 8 a.m. local time (0400GMT) Monday morning.

The first armistice reached on Oct. 10 was violated by the Armenian army within 24 hours as Armenia's missile attacks on Azerbaijan’s Ganja city claimed many civilian lives.

The second one on Oct. 17 was again violated by Armenia.

Relations between the two former Soviet republics have been tense since 1991, when the Armenian military occupied Nagorno-Karabakh, an internationally recognized territory of Azerbaijan, and the seven adjacent regions.

Four UN Security Council resolutions and two from the UN General Assembly as well as international organizations demand the "immediate complete and unconditional withdrawal of the occupying forces" from the occupied Azerbaijani territory.

In total, about 20% of Azerbaijan's territory has been under illegal Armenian occupation for nearly three decades.

The Organization for Security and Co-operation in Europe Minsk Group -- co-chaired by France, Russia, and the US -- was formed in 1992 to find a peaceful solution to the conflict, but to no avail. A cease-fire, however, was agreed to in 1994.

World powers, including Russia, France, and the US, have called for a new and lasting cease-fire. Turkey, meanwhile, has supported Baku's right to self-defense and demanded the withdrawal of Armenia's occupying forces.

Anadolu Agency website contains only a portion of the news stories offered to subscribers in the AA News Broadcasting System (HAS), and in summarized form. Please contact us for subscription options.