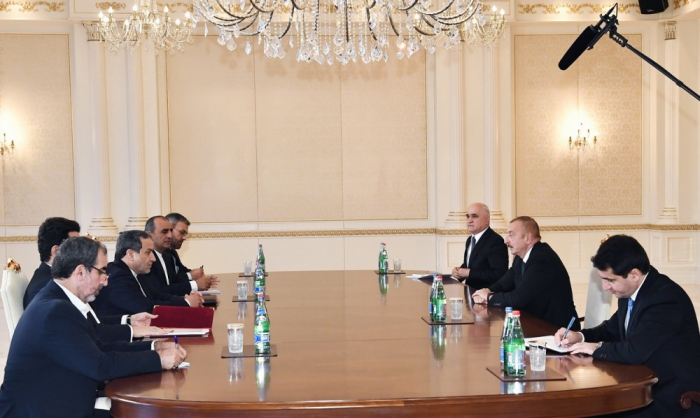 - Welcome! I am pleased to see you.

The war has been going on for a month now. It is a patriotic war for our people. We are liberating our lands from occupiers. It is the restoration of international law and historical justice.

Several villages were liberated from the occupiers today. However, Armenia's cowardly attacks have targeted our civilians. A few hours ago, several rockets were fired at Barda, killing 21 civilians and injuring more than 70. The death toll may rise further.

Armenia struck Barda yesterday too, targeting civilians again. The strike killed four people, including a seven-year-old girl. Armenia, which cannot confront us on the battlefield, wants to strike us with such immoral steps, to stop us. But it will not succeed.

It has also violated the ceasefire, which was declared for the third time and agreed upon at Armenia's own request. For the first time, less than a day after the adoption of that declaration in Moscow on 10 October, Armenia fired ballistic missiles at Ganja from its own territory. Everyone knows that Armenia violated this ceasefire, and Armenia has violated it this time too. The situation in our liberated cities and villages is clear. Almost all our cities and villages have been destroyed. Graves, historical sites and all buildings have been destroyed. It looks as though some savage tribe had occupied these lands. Our mosques have been destroyed and desecrated by the Armenians. They kept pigs in a mosque destroyed by the Armenians in Zangilan district. This footage is available on the internet. The whole world, the whole Muslim world sees what savages we are fighting. But I want to say again that nothing can stop us. If Armenia does not withdraw from the rest of the occupied territories of its own free will, we will drive them away from there as well.

I can say with satisfaction that the Azerbaijani-Iranian state border has been fully restored. I have congratulated the peoples of Azerbaijan and Iran on this occasion. I have ordered our border service to create the entire security infrastructure of this border as soon as possible. This work has already begun. As is the case in other directions of the Iranian-Azerbaijani border, this direction will be the border of friendship and brotherhood.

As you know, a few years ago, an Iran-Azerbaijan agreement was signed on the Khudafarin and Maiden Tower hydro junctions and reservoirs. I have now instructed the government to set up a working group. I would kindly ask Iran to set up a relevant body to discuss these issues as soon as possible and agree on the joint operation of this facility.

Please convey my gratitude to Mr. President Hassan Rouhani. He has called me on the phone during this period. We had a very good conversation. He also sent you to Azerbaijan, and we appreciate that. Iranian-Azerbaijani relations have developed rapidly in recent years, and I believe that they have reached the highest level in history. All the documents and agreements signed are being implemented. I am confident that our relations, built on strong historical roots, will continue to develop successfully in the future. Welcome again!

- Mr. President, thank you very much for your time.

First of all, I would like to express my condolences to you, the people of Azerbaijan and the Azerbaijani state over the rocket attack on the city of Barda today and the killing of civilians there. You are well aware that the Islamic Republic of Iran has condemned the occupation of Azerbaijani territories from the very beginning and supported the territorial integrity of Azerbaijan. I owe it to myself to congratulate you on the recent victories of the Azerbaijani Army on the battlefield and the liberation of a part of the occupied territories. I bow before all the martyrs who sacrificed their lives on this path.

I convey to you the warm greetings of Dr. Hassan Rouhani.

President Ilham Aliyev thanked for the greetings of President Hassan Rouhani and asked the special envoy to convey his greetings to the Iranian president.