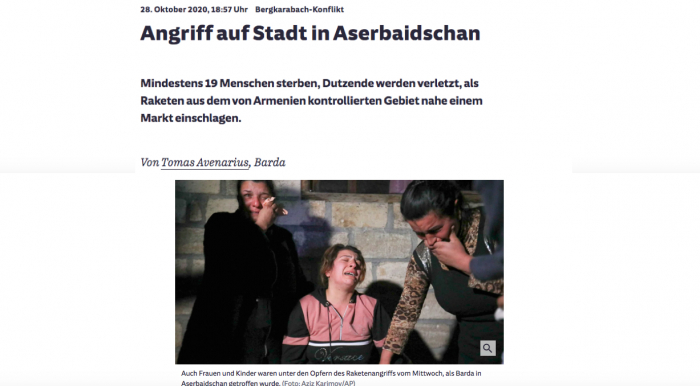 At the time of the attack, German correspondents were at the scene and saw what happened.

AzVision.az present below the report of the German correspondents:

“The Armenian Defense Ministry denied that the attack had even taken place. A spokeswoman for the Ministry of Defense tweeted shortly after the attack that the allegation of the missile attack was "insubstantial and false". At that time, Sueddeutsche Zeitung reporters saw the bodies of several victims and numerous rocket debris in the center of Barda. Surrounding places like the city of Terter were fired at with artillery at this time.

The rockets fired at Barda on Wednesday are, according to Azerbaijani sources, Smerch rockets made in Russia, which have a range of up to 70 kilometers, are shot down with multiple launchers and were apparently equipped with special anti-personnel ammunition. The day before, four civilians, including one child, had died in an Armenian rocket fire from Nagorno-Karabakh in a nearby village. There, too, the debris of the projectile could still be seen, according to Azerbaijani minesweepers it was a Smertsch missile that was also equipped with this type of ammunition”.