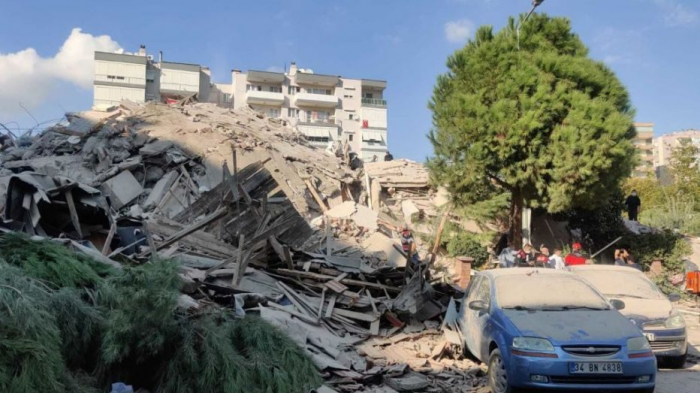 The death toll of the earthquake that happened in Turkey’s Izmir increased to 79, AzVision.az reports citing TASS.

"A total of 79 our citizens have died; 743 people out of 962 injured have been released, 219 people remain in hospitals," the Turkish emergency Directorate said.

The death toll in the earthquake in the Turkish city of Izmir increased to 69, AzVision.az reports quoting Turkish media.

Currently 220 people are being treated in hospitals.

The death toll in the earthquake in the Turkish city of Izmir rose to 64, AzVision.az citing Turkish media.

A strong earthquake occurred in the Turkish city of Izmir, on October 30, tremors of 6.6 magnitude were felt in the city and in the surrounding regions.

The death toll from Friday's earthquake in Turkey’s Aegean region has risen to 62, Azvision. az reports citing Ministry of Disaster and Emergency Management of Turkey (AFAD).

The death toll from an earthquake in Turkey’s Aegean region rose to 51 on Sunday, according to Turkish Vice President Fuat Oktay, AzVision.az reports citing Anadolu Agency.

The country's Disaster and Emergency Management Authority said as of 9.30 a.m. local time (0630GMT) Sunday, there have been 850 aftershocks with 40 stronger than magnitude-4.0.

Search and rescue activities continue in the Aegean province of Izmir.

At least 896 people were wounded Friday when a magnitude-6.6 quake jolted Izmir.

A total of 682 victims have been discharged from hospitals, while 214 are still getting treatment.