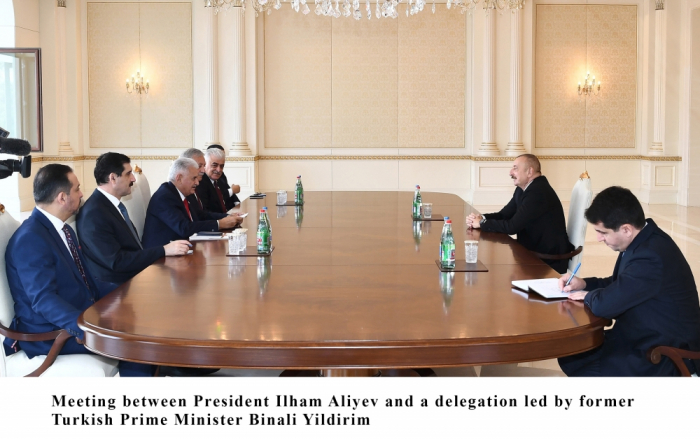 - Welcome! I am pleased to see you.

Binali Yildirim: Good to see you. How are you? Are you well?

President Ilham Aliyev: Thank you, everything is fine. Things are going well.

President Ilham Aliyev: Thank you very much for coming. We appreciate it very much. This is another manifestation of solidarity. As my dear brother Mr. President said, Turkey always stands by Azerbaijan. During this period, our unity has strengthened even more. As you know, the Patriotic War is going on, there are good results, many cities and villages have been liberated from the occupiers. I inform the people of Azerbaijan about this almost every week. The liberation of more villages from occupation will be announced today. Preliminary information has already arrived. Hopefully, we will continue this just cause until the end. We will drive the occupiers out of our lands.

Turkey stated in the very first hours that it is with us. Mr. President, my dear brother has made very clear statements that Turkey always stands by Azerbaijan and Azerbaijan is not alone. These were very important statements, and the provision of additional moral support to us is another manifestation of Turkish-Azerbaijani unity.

Dear Binali Bey, we are living this history together with you. We know very well that great efforts have been made to bring Turkey and Azerbaijan even closer together. The implementation of very important projects, including the Baku-Tbilisi-Kars railway project you are leading, is one of them. After that, there will be other projects. Hopefully, our successful cooperation will be continued.

Thank you again. I know that your visit is about solidarity and support. Therefore, I am very grateful.

I met with our President yesterday. I would like to convey the greetings of our President to you. As you know, a few days ago a great disaster occurred in Izmir.

President Ilham Aliyev: I called the President and extended my condolences.

Binali Yildirim: Yes, as I was elected an MP from Izmir, I was there from the first moments of the earthquake. During the search and rescue operation, we made great efforts to rescue our citizens from the rubble and treat the injured. Our President also came there. He also gave the necessary instructions.

Of course, as Turkey, we have always stood by Azerbaijan in this just struggle from the very beginning. We have carried on the slogan of Mr. Heydar Aliyev, “One nation, two states” to this day. We know that you are right from the ground up in the Nagorno-Karabakh issue. Because in this war, Azerbaijan is clearing its lands from occupiers.

Azerbaijan is putting an end to this 27-year old occupation and liberating its territories. Therefore, Azerbaijan writes heroic epics every day, showing a great example of patriotism day and night. On my way here, I read in the news that a plane has been destroyed.

The head of state also posed for a photo with members of the delegation.

Head of the parliamentary faction of the Nationalist Movement Party (MHP) Celal Adan then presented a keepsake to President Ilham Aliyev on behalf of the chairman of the MHP Devlet Bahceli. 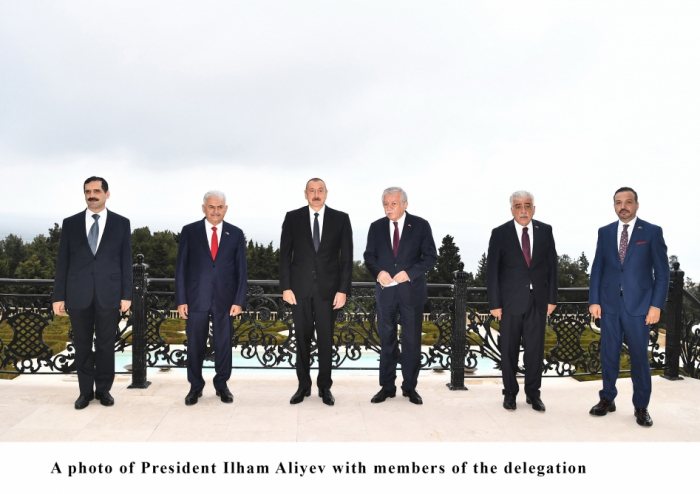 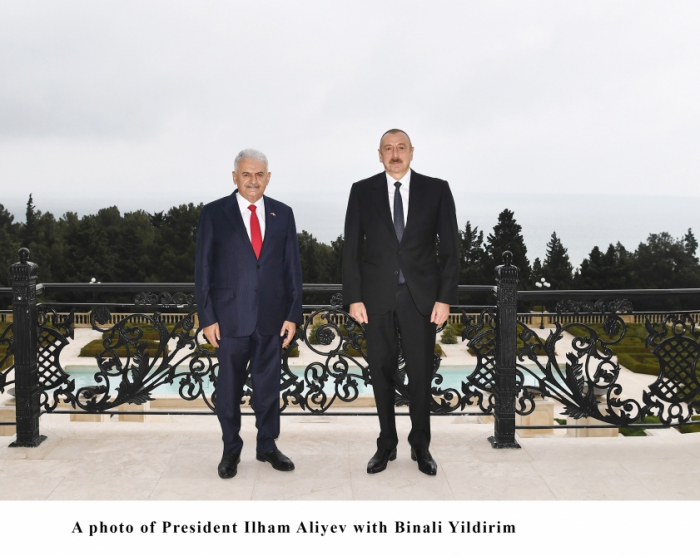