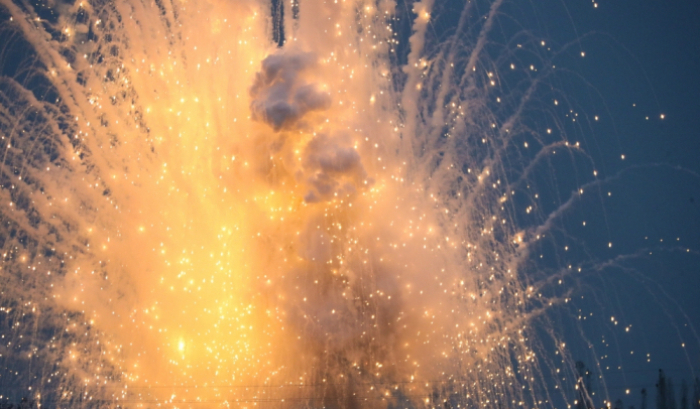 The Azerbaijan Defense Ministry previously stated that an enormous amount of phosphorus-containing cargo was delivered to the units of the third motorized rifle regiment of the 37th rifle division of the Armenian Armed Forces’ 1st field army.

It’s not the first time when Armenia uses phosphorus munitions; the Armenian side has used phosphorus bombs against Azerbaijan before. Back on October 8, the Armenian side fired a 122-mm incendiary cannon shell, in which 3.6 kilograms of white phosphorus was discovered, at the territory of Fuzuli district.

Armenia used phosphorus bombs against Azerbaijan also during the ceasefire. Back in 2016, Armenia dropped a phosphorus bomb on the village of Askipara, Tartar district.

So why is phosphorus ammunition banned, and what are the consequences of using such supplies?

When white phosphorus reacts with oxygen in the atmosphere, a fire occurs, the temperature at the epicenter of which exceeds 1,000 degrees. The combustion is accompanied by white smoke. The lethal dose of white phosphorus for humans makes up only 0.05 grams.

When entering the human organism, this substance acts extremely quickly. The activity of the gastrointestinal tract is immediately disrupted, the cardiovascular system is inhibited, and a person feels weakness and shortness of breath. These are just consequences of exposure to smoke caused by the ignition of phosphorus munitions.

Various international documents have been adopted prohibiting the use of these weapons.

During the recent hostilities, there have been reports of the use of phosphorus munitions by the Assad regime in Syria. It reported white phosphorus bombs to have been used in Idlib and in Eastern Ghouta.

In addition to damaging the Azerbaijani army with phosphorus bombs, Armenia intends to cause massive forest fires in Karabakh and a real threat of environmental disaster.

On the other hand, by causing fires using phosphorus shells, the Armenian side is trying to compensate for the absolute superiority in the air of Azerbaijani UAVs.