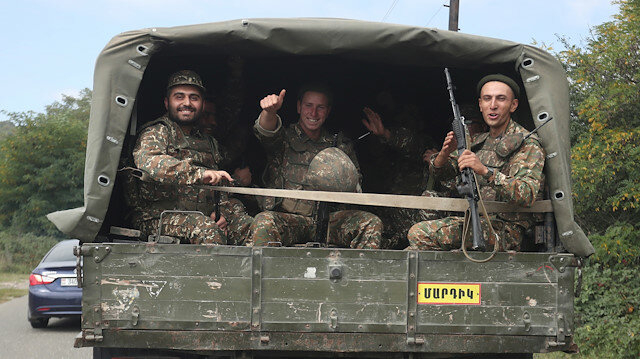 Armenia transported 300 militants from various countries in the Middle East.

Armenia has been transporting hundreds of militants from the Kurdish terror group the Kurdistan Workers’ Party (PKK) and what Turkey believes is the group’s Syrian branch, the Peoples’ Protection Units (YPG), in its renewed fight against Azerbaijan over the Armenia-occupied region of Nagorno-Karabakh, middleeastmonitor.com reports citing Turkish security sources.

Around 300 militants belonging to the Kurdish groups were transported by Armenia from various countries in the Middle East and placed in Nagorno-Karabakh, where they have subsequently begun training Armenian militias in battle and guerrilla tactics against Azerbaijani forces over the past month or two, they added, speaking on condition of anonymity.

Turkish media reported them saying the transfer of militants was a result of a covert deal struck between Armenia and the PKK towards the end of July. The Armenian militias trained by the Kurdish militants are carrying out attacks on Azeri civilian settlements.

The militants reportedly make their way to Armenia through transit routes mainly in Iran and sometimes from northern Iraq.

Relations between the two former Soviet nations have been tense since 1991, when the Armenian military occupied Upper Karabakh, an internationally recognized territory of Azerbaijan.

Four UN Security Council and two UN General Assembly resolutions, as well as many international organizations, demand the withdrawal of the occupying forces.

The OSCE Minsk Group – co-chaired by France, Russia, and the US – was formed in 1992 to find a peaceful solution to the conflict, but to no avail. A cease-fire, however, was agreed upon in 1994.

France, Russia, and NATO, among others, have called for an immediate halt to clashes in the occupied region.