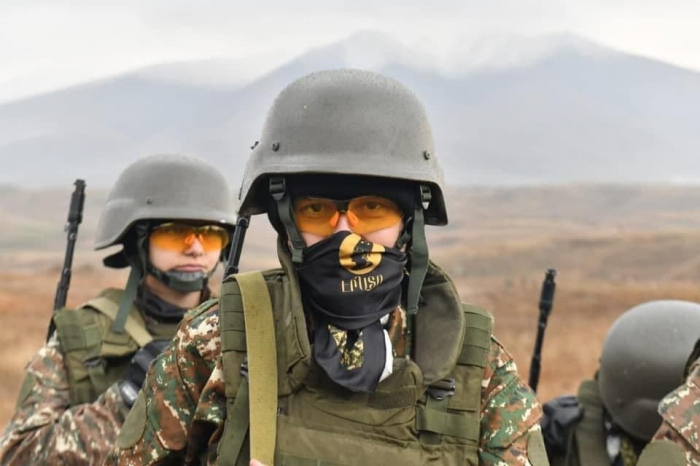 The fact that Armenian Prime Minister Nikol Pashinyan’s wife Anna Hakobyan shared her photos taken with five or six women in a training ground has sparked a discontent in the Armenian society.

Interestingly, the group, which is reportedly ready to carry out a “combat mission” after a 10-day military training and led by Pashinyan’s wife, is called Erato. They claim that the group is called Erato in honor of some Armenian queen in history. In fact, Erato – the daughter of Zeus and Mnemosyne in the ancient Greek mythology – is the Muse of choral singing and the love poetry.

Following the photos, Armenians users of social networks have begun to insult and criticize Anna Hakobyan for such an abnormal choice of the group’s name, as well as for the staged female “military training”. Some Armenian celebrities also backed the social network users’ views.

The appeal addressed by Karin Tonoyan, the founder of the Hay Aspet education and charity foundation, whose son was killed in the Karabakh battles, to Prime Minister Pashinyan received thousands of likes from social network users. 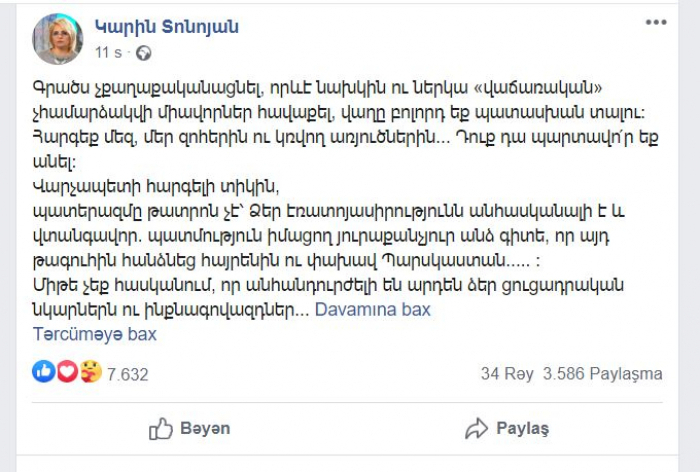 "Mr. Prime Minister, war is not a theater, your "eros" is incomprehensible and dangerous ... Everyone who reads history knows the queen’s surrendering and fleeing to Persia. Don't politicize my words, you will all answer tomorrow ... Respect us, the dead ones and the soldiers in battle. You have to do it! You don't realize that your show photos and self-promotion are unbearable. Do you understand that you insult the blood of our dead children, and also you humiliate Armenian men who are currently fighting, offend and disturb everyone? In an Armenian family, a man protects his home and homeland, and a woman respectfully supports him. Respect our traditions. It is said that your son is also at the front ... Go home and pray for him and for those who died in the war. Do the necessary work in the rear front.  Respect our grief!” 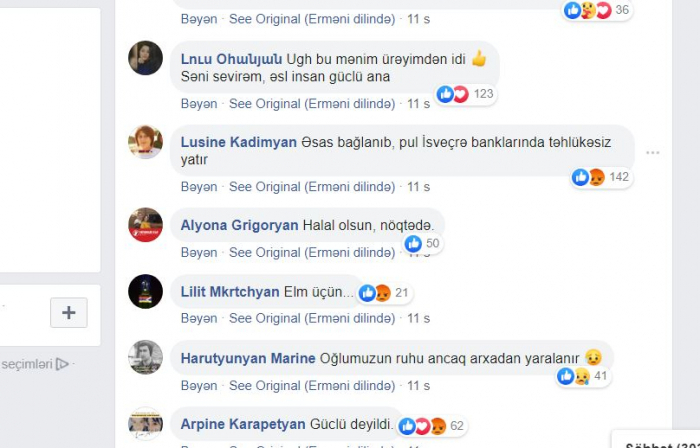 Almost 4,000 Armenians shared Tonoyan’s post, and a large number of comments were written under the appeal. Armenians "finally someone told the truth", "Their money is in Swedish banks", "Indeed, these shows insult to the souls of our dead sons", "Well done", "So no one in Pashinyan's team can normally promotes patriotism, and his wife fails in this work? " and so on.

These comments liked by hundreds of Armenian users. Someone even tagged Nikol Pashinyan’s official Facebook page in the comments section of the post to see how people wrote irritating comments on Anna's "theater scenes." This comment also became very popular.

Apparently, not only Pashinyan's but also his wife Anna's show and populist actions irritate Armenia, and Armenians regard such abnormal actions as disrespect to themselves and the soldiers who died in Karabakh.