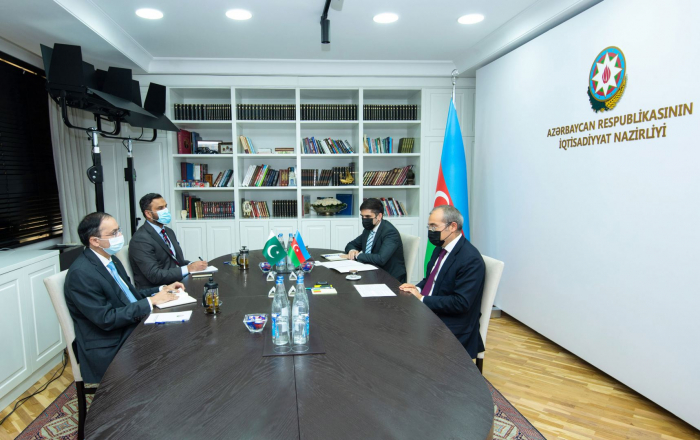 He made the remarks at a meeting with Minister of Economy of Azerbaijan Mikail Jabbarov.

The minister stressed that the Azerbaijani-Pakistani ties, based on religious and cultural values, are at the level of strategic partnership, and friendly and fraternal Pakistan was one of the first countries to recognize the state independence of Azerbaijan and has opened an embassy in Baku.

Jabbarov informed the ambassador about the next military provocations of the Armenian Armed Forces, which began on September 27, crimes against humanity, attacks committed against the civilian population, using heavy artillery and rocket launchers, also brought to attention that the Azerbaijani people highly appreciate the unequivocal and decisive position of Pakistan in connection with the aggressive policy of Armenia, and the fact that Pakistan always supports Azerbaijan.

Jabbarov strongly condemned the terrorist attacks that took place in Pakistan in recent days and led to human casualties, and expressed condolences to the ambassador.

Haye noted that he will make efforts to further develop Pakistani-Azerbaijani cooperation, stressed that Pakistan supports Azerbaijan's fair position in the Armenian-Azerbaijani conflict, and is always close to Azerbaijan.

The parties discussed the expansion of trade and economic ties between the two countries, mutual exchange of experience in various fields and other issues.