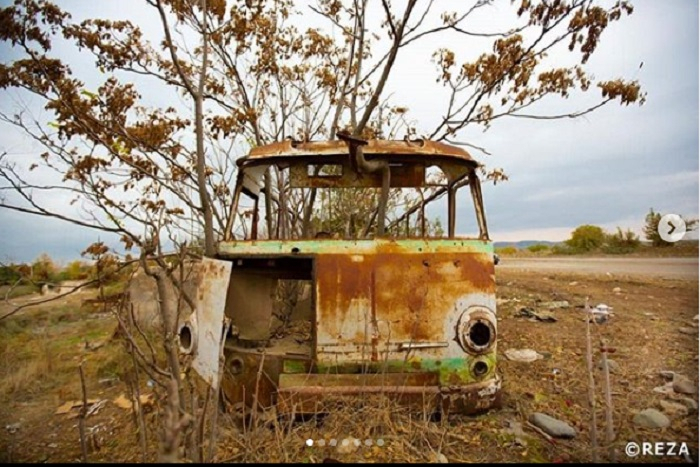 He wrote about his meetin with refugees from Füzuli, and mentioned that he wil never forget the stories they told about the moment they had to leave their homes and lands.

When the Armenian army attacked, many of them filled up buses with few belongings they could take with them. Just outside, they were all stoped by Armenian soldiers and forced out of the bus, their belongings were ransacked, women were assaulted, their jewelries were stollen taken, pockets were emptied, the men opposing this violence were shot. After this frisking, the soldiers asked them to take our their shoes and then shooting in the air ordered them to run.

"Seeing this abandoned bus echoed with this memory. These stories I heard repeatedly from many refugees and displaced people. Today almost at the same place I found buses that symbolically made me think about these stories. Then I found, on the ground, the shoes and outfits of Armenian soldiers left here probably while they were fleeing. This is a lesson from History, don’t do to others what you wouldn’t someone else do to you.

Füzuli was a flourishing inhabited city, today it is a ghost town where nature took over everything," he wrote.