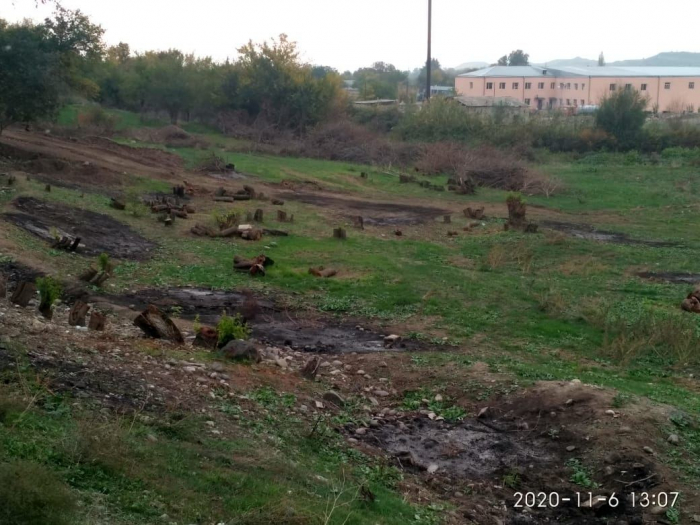 Employees of the Azerbaijani Ministry of Ecology and Natural Resources, represented in the Operational Headquarters established on the basis of the decree of the President of Azerbaijan dated October 29, 2020 ‘On the organization of temporary special administration in the territories of Azerbaijan liberated from the occupation in order to protect the environment, efficient use of natural resources and their initial assessment’, started monitoring in the territories of Gubadly, Zangilan, Jabrayil, Fuzuli and Khojavand districts, AzVision.az reports citing Trend.

Monitoring and observation along the Araz River showed that all houses, buildings, historical monuments and cemeteries in settlements were completely destroyed, mulberry trees, poplars, plane trees, pines and fruit trees along the roads were cut down, and in some places are completely burned, said the ministry.

The ministry noted that deliberate fires in forests and green spaces destroyed vegetation and fertile soil.

“One of the facts confirming the Armenian vandalism is the deliberate felling of thousand-year-old trees included in the list of unique natural monuments with a special protected status since the post-Soviet times, and the creation of conditions for the targeted destruction of the rich natural heritage. Thus, according to the results of monitoring carried out over several days, it was established that 1,600, 900 and 500-year-old eastern plane trees (Platanus orientalis) were destroyed in Gubadly, Fuzuli and Jabrayil districts. The two-meter shoots that sprouted in the place of these trees confirm that these ancient plane trees were cut down several years ago," the ministry added.