Armenia wakes up from dream of illusion- Pashinyan deceives its people 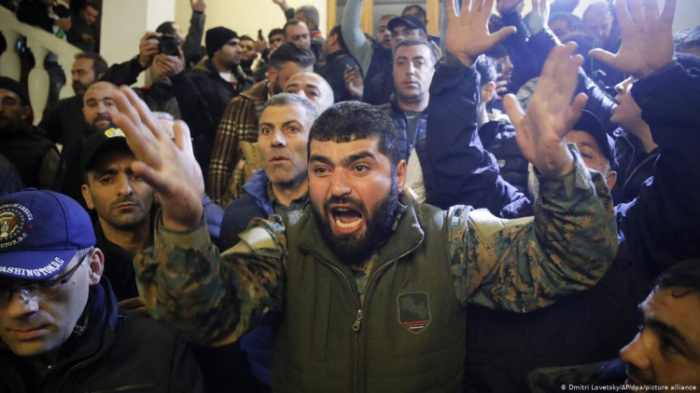 Armenian people are furious after the Nagorno-Karabakh peace deal signed to stop the battles in the region, AzVision.az reports citing RIA Novosti.

Protesters call the trilateral agreement between the leaders of Russia, Azerbaijan and Armenia a ‘betrayal’. They mainly criticized Prime Minister Nikol Pashinyan who claimed that a catastrophic military situation has arisen in the frontline in Karabakh, and people want to find out who is to blame.

Pashinyan acknowledged that Armenian military forces were fighting against the strongest army. However, protesters do not accept this acknowledgement as an excuse.

"There was a choice! Pashinyan did not want Armenia to be recognized as a belligerent country," shouted a woman holding a flag.

"We did not know! We did not select him! For him, there was only a small active group of pro-Russian organizations," the protesters shouted. In general, they are right: in Armenia, the prime minister is elected by parliament, and the people vote for the parties. "They tricked us!"

Armenian political commentator Ayk Khalyatyan believes that the arrest of the opposition leaders is unlikely to help the prime minister stay in power.

"Now Pashinyan is trying to accuse corrupt elites who have done nothing to strengthen the country. The prime minister thinks that the people's rejection of oligarchs and corrupt officials strengthens his position, but this is not the case," he said.

In 2018, the protesters hoped Pashinyan would solve Armenia’s problems. Now the same protesters intend to evict him. Even if he stays in power in the coming days, his political career will end.