Azerbaijani FM had a telephone conversation with UN Secretary General 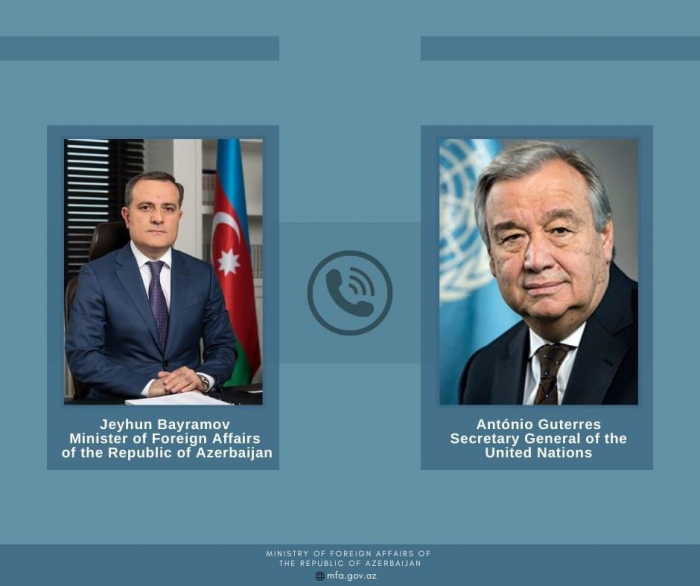 On October 17, 2020, a telephone conversation took place between the Minister of Foreign Affairs of the Republic of Azerbaijan Jeyhun Bayramov and the UN Secretary General Antonio Guterres, AzVision.az reports citing MFA press service.

Minister Jeyhun Bayramov briefed his counterpart on the implementation of the joint statement dated November 10 on the ceasefire and cessation of all hostilities.

The Secretary General was informed about the complete destruction and demolition of all infrastructure in the liberated territories of Azerbaijan, as well as the criminal acts being committed by illegal military units and illegal settlers in the territories to be returned back to the control of Azerbaijan soon, including damage to the environment, deforestation, burning of houses, looting of cultural monuments and etc.

Mentioning the need for large-scale work to restore the entire region, Minister Jeyhun Bayramov expressed the intention of Azerbaijan to cooperate with relevant international organizations, including the UN, as part of measures to be taken to this end.

Secretary General Antonio Guterres underlined that the signing of a joint statement on the cessation of hostilities was welcomed.

The Secretary-General noted the important role that the United Nations could play in the rehabilitation of the territories, and stressed the importance of providing appropriate support for the return of IDPs to their homes.