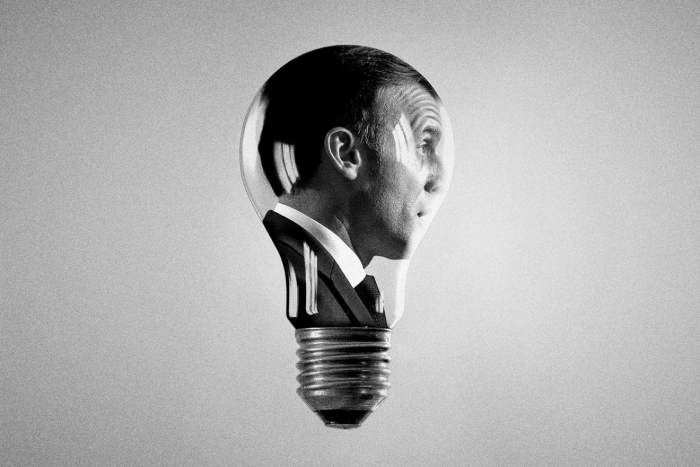 When it comes to talking about foreign policy, Emmanuel Macron is definitely a world leader. But the more he talks, the more the French president also reveals his own shortcomings on the international stage.

Every time Macron gives a big interview or major speech, much of the French and European policymaking cosmos is impressed, even dazzled, by the grand strategic vision he sketches out with eloquence.

British analysts and journalists regret out loud that Prime Minister Boris Johnson — despite his classical education — still hasn’t delivered such an oratorical opus. German officials privately admit they sometimes envy Macron’s flair and pizzazz, which contrasts with the monochrome Angela Merkel. Even Baltic and Eastern European policymakers laud his intellectual prowess, if not his warm overtures to Russia.

Some of that reaction was in evidence again this week after Macron expounded on world affairs in a 12,000-word interview with Le Grand Continent, a journal published by a French think tank.

His trenchant analysis and provocative quotes make him sound more like a think-tanker-in-chief than the commander-in-chief of the EU’s sole nuclear power and a permanent member of the U.N. Security Council.

But Macron is now three and a half years into his presidency and, although he has been able to claim some notable successes, his foreign policy record has often failed to match his own high-flown rhetoric and lofty ambitions.

His gift of the gab has masked the extent of French impotence in many essential foreign theaters. For all his talk of building up “European sovereignty” and “strategic autonomy,” Macron’s tenure so far shows the limits of what France and Europe can achieve internationally without the support of the United States.

“The commitments France made are too ambitious and it hasn’t managed to convince the U.S. to continue working with it on the big issues: Iran, climate, trade or COVID,” said Tara Varma, head of the Paris office of the European Council on Foreign Relations.

Admittedly, Macron has not had it easy on the transatlantic front. In Donald Trump, he faced a unilateralist U.S. president who enthusiastically pursued withdrawal from international organizations and two key international agreements: the Paris climate pact and the Iran nuclear deal. Macron has tried valiantly to limit the damage or keep things on life support but his rhetorical powers failed to convince Washington to change its fundamental course.

In Joe Biden, Macron will have a partner in the White House who is committed to working closely with America’s traditional allies and returning to international forums. But, crucially, as transatlantic relations are revived, Macron has failed to cement his vision of a strategically autonomous Europe into the bedrock of EU foreign policy — even if he has managed to make it a central part of the conversation.

That reality was on full display this week, as the French president clashed with German Defense Minister Annegret Kramp-Karrenbauer, who appeared to outmanoeuvre him in a tussle over how much — and how fast — the EU can realistically ramp up its defense capabilities as the U.S. pivots toward Asia.

Macron’s biggest, legacy-building achievement so far is the EU’s coronavirus recovery fund — the culmination of a long-held French ambition to get the bloc to take on common debt. Although Merkel’s conversion to the idea was crucial, Macron’s government worked closely with Berlin to lay the groundwork for the plan. That came on top of years of efforts from the French president to build a close relationship with Berlin.

In other areas, Macron has pushed Europe to develop a more cohesive approach to China and also ventured into the digital domain, playing a key role in the Christchurch Call — a pledge by countries and companies to eliminate extremist content on the internet in the aftermath of the 2019 terrorist attack in New Zealand.

He has also led a charge to make trade deals contingent on compliance with the Paris agreement and tried to shepherd a more collective approach to the global response to the coronavirus pandemic.

But some of his claims to have influenced the global landscape are viewed as overblown, such as his assertion that France played a crucial role in keeping China within the Paris climate deal.

“It’s total wishful thinking,” said Antoine Bondaz, a China researcher at the Foundation for Strategic Research think tank in Paris. “China stayed in the climate agreement because it was in its interest, it allowed it to feed the narrative that the U.S. is unilateralist while China is a multilateral power. Its commitments in the Paris agreement are long-term so they don’t have a major impact on its economy right now.”

Closer to home, on Europe’s borders and in its neighbourhood, France under Macron has been hyperactive on multiple fronts — with diplomacy and sometimes military muscle. But it has often failed to change the geopolitical landscape, undermining France’s ambition of leading a European bloc that could rival the U.S. and China.

“The French do, in fact, put their money where their mouth is — in the Sahel, the Mediterranean, the Gulf, and even Central Europe. It’s an impressive and ambitious agenda. But for all the grandiosity, France is a middle power that struggles to shape outcomes, even in the near-abroad, by itself,” said Tobias Schneider, a research fellow at the Global Public Policy Institute in Berlin.

Earlier this month, France was cut out of the ceasefire agreement reached in Nagorno-Karabakh despite Macron’s efforts to get involved. Russian President Vladimir Putin brokered the deal alone, while Turkey, having decisively intervened militarily, also helped shape the outcome.

In Lebanon, France’s attempt to sponsor and broker a solution to the country’s political crisis has so far failed. Macron has been outmanoeuvred by local power plays and overshadowed by the greater U.S.-Iran power struggle, despite France’s historic sway in the country and the French president investing an unusual amount of personal political capital.

In the Eastern Mediterranean, Macron took a forceful stand against what he describes as Turkish expansionist and hegemonic behaviour. But he failed to get key NATO and EU allies to back his hard-line. While many have voiced support for Greece and Cyprus in their disputes with Turkey, they have adopted a more cautious approach.

“Macron’s mercurial, first-through-the-breach approach to foreign policy isn’t exactly conducive to getting partners on board. A common European foreign and security policy cannot just mean us signing up for French swashbuckling,” Schneider said.

In Libya, France’s initial backing of strongman Khalifa Haftar, breaking European ranks, has failed to pay off. Instead, Turkish military intervention has strengthened Haftar’s rival, the head of the U.N.-recognized government Fayez al-Sarraj.

And Macron’s decision to pursue dialogue with Russia not only injected suspicion and distrust into his relations with Eastern European and Baltic states, it has yet to produce results — as his own defense minister has admitted.

In the interview published this week, Macron the think-tanker astutely noted that “the de facto situation has become the new doctrine for many countries” — pointing to examples where both Russia and Turkey could operate with impunity outside their borders to protect what they saw as their own state interests. “So we have to find bypassing mechanisms to surround them,” he said.

But Macron the president has yet to come up with effective ways to do just that.

In the same interview, Macron’s choice of words attracted the kind of attention any foreign policy pundit would be glad to receive. But they seemed injudicious for a president who says he wants closer cooperation with allies.

Despite the imminent arrival of a more friendly U.S. administration, Macron never once uttered the word “transatlantic” — even as he spoke repeatedly about the need for European strategic autonomy. That was widely noted by Eastern European, Baltic and German analysts and policymakers.

Macron also took a public swipe at Kramp-Karrenbauer, the German minister — known by her initials AKK — once seen as the heir apparent to Merkel but now due to bow out soon as the leader of the governing Christian Democratic Union (CDU).

In a thinly veiled response this week, Kramp-Karrenbauer held her ground in criticizing the concept of strategic autonomy and arguing Europe will need to rely on the U.S. for security for the foreseeable future.

Observers suggested Macron’s criticism — and his attempt to drive a wedge between Kramp-Karrenbauer and Merkel — would backfire and only strengthen the defense minister domestically.

“If Emmanuel Macron is trying to resurrect AKK as CDU chair and candidate for chancellor, he’s doing great!” said one European diplomat.

Read the original article on Politico.