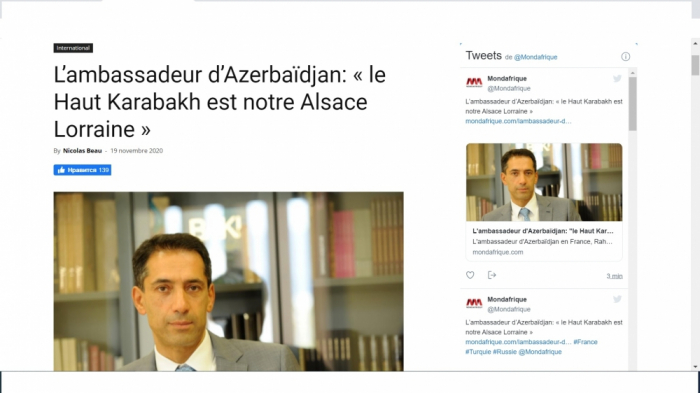 Journalist Sylvain Tesson, who prepared a report for Le Figaro Magazine from Armenia, commented on the Armenia-Azerbaijan Nagorno-Karabakh conflict in a biased manner during a program aired on France Inter TV channel, Azerbaijani Ambassador to France Rahman Mustafayev said in an interview published by Monde Afrique, AzVision.az reports.

“Tesson asked France, “the eldest daughter of the Church”, for support Orthodox Armenians, noting that “we must not forget that our country [France] has Christian roots,” the diplomat said in his interview, titled “Nagorno-Karabakh is our Alsace Lorraine”.

Mustafayev noted that considering himself a strategist in the satanic world, Tesson tries to divert attention from the occupation policy of Armenia by trying to give the Karabakh conflict a religious colouring.

Expressing objection to the bias of French media outlets and journalists, the ambassador said: “why do they write only about Turkey’s political support for Azerbaijan?”

“After all, Azerbaijan has reinforced its army with the military equipment purchased from Israel, Russia and other countries. Why do these media outlets prefer to be silent about the countries arming Armenia free of charge?” said Mustafayev, stressing that such biased attitude by France and its media outlets is ‘regrettable’.

“Such an attitude is nothing but disrespect for international law,” he added.

The diplomat also slammed Tesson for distorting facts about the history of Karabakh and demonstrating pro-Armenian position.

In the interview, Mustafayev also provided information about Armenia’s military provocations and its grave consequences.

He also strongly condemned the allegations by the French media about the alleged involvement of “mercenaries” by Azerbaijan.