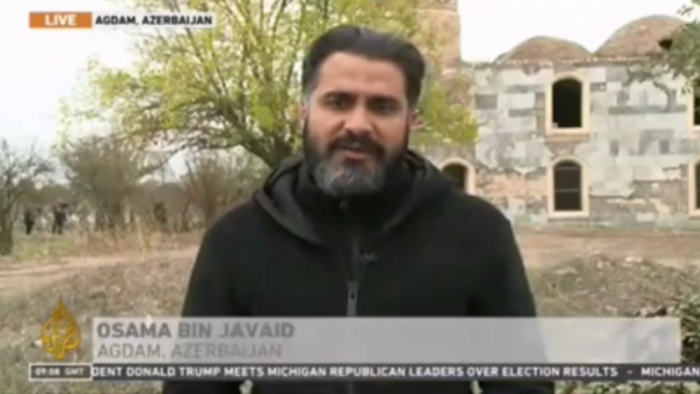 Azerbaijan’s military takes over one of three districts Armenia agreed to give back in the contested region as part of a peace deal, Al Jazeera’s Osama Bin Javaid reported in an article titled "Azerbaijan enters Nagorno-Karabakh district after peace deal".

“Units of the Azerbaijan Army entered the Aghdam region on November 20, which had been controlled by Armenian separatists for nearly 30 years", the article says.

In the hours leading up to the handover, residents of the district set their homes on fire, leaving nothing behind for their longstanding rivals.

As part of last week’s peace deal, Armenia agreed to return some 15 to 20 percent of the Nagorno-Karabakh territory captured by Azerbaijan in recent fighting, including the historical town of Shusha.

Armenia will also hand over the Kalbajar district wedged between Nagorno-Karabakh and Armenia on November 25 and the Lachin district by December 1.

The exchange of territory was originally due to begin on Sunday, with Armenians in the Kalbajar district fleeing en masse before the official deadline for Azerbaijan’s takeover.

But Azerbaijan’s President Ilham Aliyev postponed the deadline by one week over “humanitarian” considerations.

“This place was one of the most populated areas in Nagorno-Karabakh,” he said. “Almost 200,000 people used to lived here. All of them became displaced into Azerbaijan.”

“We’re speaking to many who want to return to Aghdam but they say the area is not safe,” he continued.

“The government has to make sure all of the Armenian fighters are gone, the infrastructure is rebuilt, the area is cleared of mines and unexploded munitions so that people could go back and rebuild their lives.”

Tensions between the former Soviet Union countries reached new heights on September 27, when clashes between Azerbaijan and ethnic Armenian forces broke out over the Nagorno-Karabakh enclave and surrounding areas.

Nagorno-Karabakh is in Azerbaijan but has been dominated by ethnic Armenians for years.

Most of Azerbaijan’s southwestern district of Aghdam has been under the control of Armenian separatists since 1993. Before the post-Soviet war, it was inhabited by some 130,000 people – mostly ethnic Azerbaijanis who were expelled from their homes.

On November 10, the two countries signed a Russia-brokered agreement to end the fighting and work towards a comprehensive resolution.