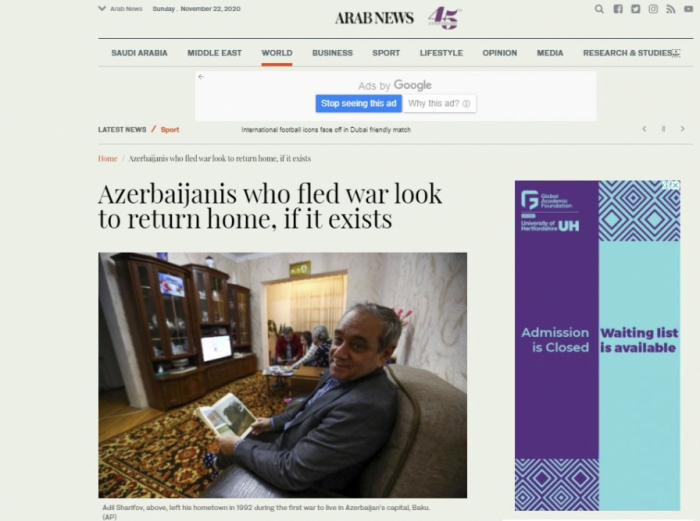 The Saudi Arabian English-language Arab News newspaper has published an article, entitled “Azerbaijanis who fled war look to return home, if it exists.”

The article notes that the Azerbaijani Army has liberated the country’s territories from the 25-year long occupation and IDPs are returning to native lands.

The author recalls that in the 1990s, about a million Azerbaijanis were forced to leave their homes as a result of the occupation of Azerbaijani territories by Armenia.

The article also says as a result of the 44-day fighting that started on September 27, the Azerbaijani Army has liberated more than 300 settlements from occupation. It stresses that after the Armenian Prime Minister signed a capitulation statement, the process of transferring Aghdam, Lachin and Kalbajar districts to Azerbaijan has started.

It highlights that all buildings, roads and other infrastructure have been destroyed in the liberated Aghdam and Fuzuli cities. The city of Aghdam, where 50,000 people once lived, is now a shattered ruin.

The article also contains the views of Jabrayil resident Adil Sharifov, who has been living an IDP in Baku for 27 years. Sharifov said the city of Jabrayil has been destroyed by Armenian occupiers, noting that he and his family will rebuild their house in their hometown.