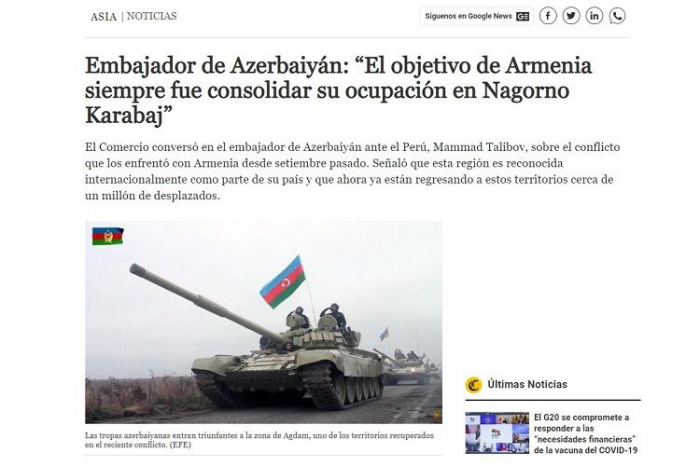 Well-known Peruvian newspaper 'El Comercio' has published an interview with Azerbaijani Ambassador to Peru Mammad Talibov on the Armenian-Azerbaijani conflict and the ceasefire statement.

Speaking about the history of the conflict, Talibov said that one-fifth of Azerbaijan's internationally recognized territories, including Nagorno-Karabakh and seven surrounding regions, have been under Armenian occupation for nearly 30 years. Nearly one million Azerbaijanis have been displaces as a result of Armenia's ethnic cleansing policy. Stating that Azerbaijan has always supported settlement of the conflict through negotiation, the ambassador said that Armenia's goal has always been to consolidate the consequences of the occupation of Nagorno-Karabakh, and therefore ignored the UN Security Council resolutions demanding the immediate liberation of the occupied territories. He also noted that talks held within Minsk Group has been fruitless.

Talibov noted that when the nationalist forces came to power in Armenia in 2018, the country's provocations against Azerbaijan increased, and since September 27, the Armenian armed forces launched large-scale attacks on civilians, which resulted in casualties among civilian population. The Azerbaijani army has launched counter-offensive operations to ensure the security of the civilian population, achieve the implementation UN Security Council resolutions and restore the territorial integrity of our country within the legal framework of right to self-defense.

He said that the liberated Azerbaijani cities had been completely destroyed by Armenia for 30 years. Azerbaijan will appeal to the international courts regarding Armenian robbery in Azerbaijan's territories.

Answering the question on signed peace deal, he said that Armenia immediately violated the humanitarian ceasefire three times during the military operations, and now peacekeepers are deployed in the region.

Azerbaijani Ambassador also noted that Azerbaijan is a multicultural country, home to about 40 people of different ethnicities, including tens of thousands of Armenians, and in this regard we have no problems with Armenians living in Nagorno-Karabakh. After return of about one million Azerbaijanis to their lands, two nations should live together in peace despite the difficulties.