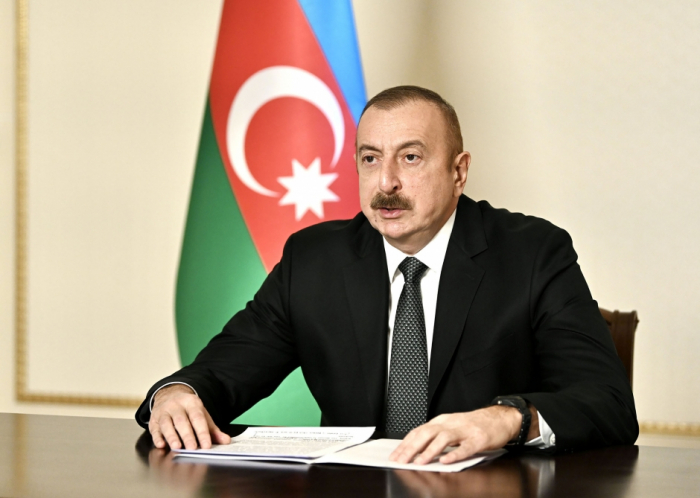 A Special Session of the United Nations General Assembly in response to the Coronavirus Disease (COVID-19) Pandemic at the level of the heads of state and government has been held in New York.
President of the Republic of Azerbaijan, chairman of the Non-Aligned Movement Ilham Aliyev addressed the session in a video format.

Mr. Secretary-General,
Distinguished Heads of State and Government,
I wish to express my gratitude to the Secretary-General Mr. António Guterres and the President of the General Assembly Mr. Volkan Bozkir for their efforts in the organization of the Special Session of the General Assembly in response to the COVID 19 pandemic.
I convey my gratitude to all Member States that have supported the initiative to hold the Special Session.
Today, there is a great need for joint efforts of international community to counter COVID-19 pandemic which is the biggest threat to the world.
Azerbaijan, as the Chair of the Non-Aligned Movement, demonstrating responsibility at the national and international levels initiated holding of the Summit of the Contact Group of the Non-Aligned Movement in response to coronavirus on 4 May 2020. During the Summit, I suggested the convening of the Special Session of the UN General Assembly in response to coronavirus at the level of the heads of state and government. All 120 Non-Aligned Movement members supported this proposal. It reaffirmed their commitment to “Bandung Principles”, Movement’s values, multilateralism and international solidarity. Overall, more than 150 UN Member States supported this initiative.
Azerbaijan has taken timely and necessary preventive measures to stop the spread of the virus. We have taken adequate actions in response to the emerging situation with regard to COVID-19.
Today, the coronavirus patients are undergoing treatment in 46 state hospitals across the country. We had 6 functional laboratories when pandemic has started. Currently, we have more than 40 operational laboratories.
The Government has released the socio-economic and financial support package worth over 2.5 billion US dollars to counter the negative impact of pandemic. The social support measures cover nearly 5 million people which is half of country’s population. Funding for the fight against the pandemic was provided only from domestic sources, without any external financial support.
Now, the world faces the new wave of pandemic.
Since the outbreak of pandemic Azerbaijan is in close contact with the World Health Organization. We are grateful for its valuable recommendations and sending its specialists in the early days of pandemic. The World Health Organization named Azerbaijan an example in the fight against the pandemic. We have made two voluntary contributions to the World Health Organization in the amount of 10 million US dollars. In the meantime, to date, Azerbaijan has provided humanitarian and financial assistance to more than 30 countries.
Mr. President,
Azerbaijan supported the initiative of the Secretary-General on a global ceasefire during the pandemic. However, this call remained unheard by Armenia that kept under occupation of Azerbaijani territories for almost 30 years and ignored four UN Security Council resolutions which demanded the withdrawal from all our occupied lands.
During the last 2 years, Armenia deliberately destroyed the negotiation process. The Prime Minister of Armenia made a number of provocative statements like “Karabakh is Armenia”, which put an end to negotiations. The Minister of Defense called for “new war for new territories”.
In July 2020 Armenia perpetrated military provocation along the state border to create a new source of tension in the region, to occupy new territories and damage Azerbaijan’s strategic energy infrastructure projects.
Later, in August Armenian sabotage group attempted to penetrate through the Line of Contact.
In my statement during the General Debate of the General Assembly on 24th of September I warned that Armenia is preparing for the new war.
On September 27th Armenia launched large-scale military aggression against Azerbaijan. During 44 days, armed forces of Armenia heavily shelled Tartar and other cities of Azerbaijan situated along the frontline. Armenia fired ballistic missile against Ganja, Barda, Mingachevir, Gabala, Siyazan and other cities which are far away from frontline. They used heavy artillery, ballistic missiles, white phosphorus, cluster munitions to cause mass casualties and forced displacement among Azerbaijani civilians. 94 civilians, including 11 children were killed, more than 400 wounded.
Azerbaijani Army responded adequately and defended its citizens and territory and launched successful counter attack operation which resulted in liberation of large parts of our occupied territories. Military victory of Azerbaijan during the military operations forced aggressor to surrender and led to signing of trilateral statement of the Presidents of Azerbaijan and Russia and Armenia’s Prime Minister on November 10th, which provided liberation of other occupied territories. Since that time the regime of ceasefire is holding for almost a month. Turkey and Russia play an important role in ensuring ceasefire through Joint Ceasefire Monitoring Center.
Thus, Armenia-Azerbaijan Nagorno-Karabakh conflict was resolved by military-political means. In the absence of compliance with the international law it was inevitable to ensure the implementation of Security Council resolutions by force. As a result of which, the aggressor state was enforced to peace.
It was not the only destructive attitude of Armenia. Armenia was the only country to oppose the initiative of holding the Special Session of the General Assembly on COVID-19 pandemic. Until the last moment Armenia by all means tried to undermine the preparatory process to hold the Special Session. Armenia objected to this initiative simply because it has been launched by Azerbaijan.
I believe the Special Session will contribute to the global fight against pandemic and will make us more united around our common goal.
Thank you.