What next for the MAGA insurrection? - OPINION 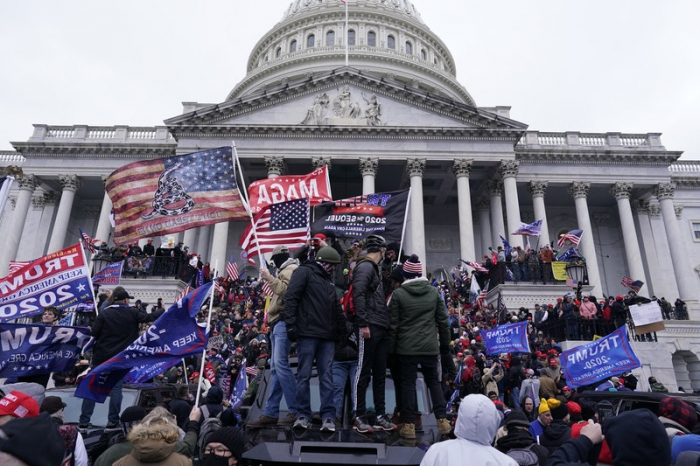 Having been fed a steady stream of lies by Donald Trump and right-wing media outlets like Fox News, many of those who stormed the US Capitol on January 6 may have genuinely believed that they were saving the American Republic from usurpers. Now that they have returned home, defeated, what will they do for the next four years?

When people stormed the Bastille in Paris on July 14, 1789, their purpose was to free inmates whom they saw as political prisoners of the monarchy. And when Frenchwomen marched from Paris to Versailles that October, their goal was to force the king to return with them and live among the people.

What goal did Donald Trump’s supporters have in mind when they stormed the US Capitol on January 6? Some vandalized the Speaker of the House’s offices, and some destroyed memorials to the late civil-rights leader and congressman John Lewis. Others broke into the Senate chamber to take selfies from the presiding officer’s chair. A Florida man walked off with a podium.

To understand why they were there in the first place, we need to roll back the tape. Just before the insurrection, Trump held a “Save America Rally” in a park behind the White House, where he told his audience that:

“All of us here today do not want to see our election victory stolen by emboldened radical left Democrats, which is what they’re doing and stolen by the fake news media. That’s what they’ve done and what they’re doing. We will never give up. We will never concede, it doesn’t happen. You don’t concede when there’s theft involved. Our country has had enough. We will not take it anymore and that’s what this is all about. To use a favorite term that all of you people really came up with, we will stop the steal. … We won this election, and we won it by a landslide…”

The problem, Trump went on to claim – falsely – is that seven states had sent “illegitimate” electoral vote tallies to Congress. “With only three of the seven states in question, we win the presidency of the United States.”

The news that Democrats had won both Georgia Senate seats in run-off elections the previous day raised the stakes. Starting on January 20, Vice President Kamala Harris will cast the tie-breaking vote in the Senate, and Majority Leader Mitch McConnell will become the minority leader, handing control over to Democratic Senator Chuck Schumer of New York.

Thus, unlike in 2016, “We have no back line anymore,” Trump warned. “The only line that we have is the veto of the president of the United States.” He pointed out that many Republicans are still fighting hard to overturn the election. “I want to thank the more than 140 members of the House… warriors… studying the roots of the Constitution…. They know we have the right to send a bad vote that was illegally got [back to the states].” He then went on to thank the 13 Republican senators who also “stepped up,” not least Josh Hawley of Missouri and Ted Cruz of Texas.

But Trump warned that there are “weak” Republicans, too – “Mitch [McConnell] and the group” – who “don’t realize that that’s going to be the end of the Republican Party as we know it.” But it’s “never going to be the end” for Trump’s movement. “Let the weak ones get out,” Trump advised, “This is a time for strength.”

Trump concluded his speech with a call to action: “We’re going to walk down Pennsylvania Avenue… give our Republicans, the weak ones… the kind of pride and boldness that they need to take back our country.”

Suppose that you believed that the president was a serious person who was telling the truth (or at least not exaggerating more than the typical politician). What would you do? Surrounded by others of a similar mind, you might conclude that you should “walk down Pennsylvania Avenue” to get in the face of those “weak” politicians so that they will “come through for” you. According to the president, Vice President Mike Pence, McConnell, and the others needed a push to “do the right thing”: halt the counting of the Electoral College votes and send the fake and “illegal” certified tallies “back to the states to recertify.” If that happens, “we become president, and you are the happiest people.”

Believing this, you might be willing to push people out of the way – to break a few windows and club a few police officers – to get in front of the legislators who need to grow a backbone.

But now it is the day after the storming of the Capitol, and you find that, even though you had done your job, not enough senators had grown a backbone; in fact, their ranks had been halved, with only six proving “brave” enough to object to the certification of the election. What happened? You belong to the real majority, and you passed the baton to cowardly McConnell and Pence so that they could do the right thing. But in the end, they dropped it.

What will you do next? If the past is any guide, you will eagerly await your leader’s instructions – even if they are directions to the next cliff.

J. Bradford DeLong is Professor of Economics at the University of California at Berkeley and a research associate at the National Bureau of Economic Research. He was Deputy Assistant US Treasury Secretary during the Clinton Administration, where he was heavily involved in budget and trade negotiations. His role in designing the bailout of Mexico during the 1994 peso crisis placed him at the forefront of Latin America’s transformation into a region of open economies, and cemented his stature as a leading voice in economic-policy debates.