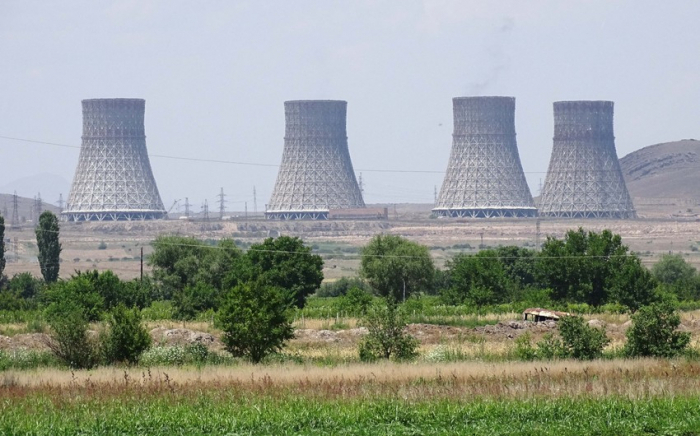 Having suffered a heavy defeat in the 44-day Second Karabakh War, Armenia is engulfed in a deep crisis in all areas. Both domestic political tensions and the socio-economic downturn in the country reached their peak. The forces that cannot “accept” Azerbaijan’s liberation of its territories from occupation still strive to come to power in Armenia. Instead of taking advantage of the new opportunities for Armenia’s way out of the crisis and regional cooperation, such forces continue to make bellicose statements by sticking to their criminal position.

Such a statement was recently voiced in the Armenian parliament. Addressing the recent meeting of the parliamentary standing Committee on regional affairs and Eurasian integration, Deputy Minister of Territorial Administration and Infrastructure Hakob Vardanyan said the Metsamor NPP produced a significant amount of radioactive waste during its operation, as well as radioactive fuel that is not classified as "industrial waste".

The deputy minister made the aforementioned statement while responding to a question from Mikael Melkumyan, head of the parliamentary Commission and MP from Prosperous Armenia Party, on a possible use of this waste for military purposes.

In particular, Melkumyan asked whether the radioactive waste from the Armenian nuclear power plant could be used for military purposes, for example, to increase the country's defense capabilities and the capabilities of the self-defense system.

Melkumyan asked: “Can we start enriching them [radioactive waste]? Do we have a chance? Are we able to provide the appropriate technological level for this purpose?”

In his response, Deputy Minister Vardanyan said in this case one can only talk about radioactive fuel stored in dry warehouses.

“The answer to your question is, in theory, always “yes”. Nevertheless, I cannot talk about the technical implementation of this initiative, since I’m not an expert in this field. We know from chemistry lessons that plutonium is a key element in making an atomic bomb, and it is formed by burning uranium. However, I cannot say how we can achieve this and what technological advances we need to use for this purpose,” Vardanyan added.

At the same, the deputy minister found it difficult to answer the question about whether Armenia could make a technological leap to achieve this goal.

It is not the first time that the Armenian parliament is openly debating the possibility of making a “dirty bomb” against Azerbaijan. Following Armenia’s heavy defeat in the April battles of 2016, former Prime Minister Hrant Bagratyan said the country possesses a nuclear weapon.

In his speech at the World Humanitarian Summit in Istanbul on 23 May 2016, Azerbaijani President Ilham Aliyev said, another serious threat to the whole region is an outdated Armenian nuclear power plant in Metsamor.

“There is information that Armenia is illegally using radioactive waste. Former prime minister, member of parliament and other officials of Armenia declared this April that Armenia has a nuclear weapon, a so-called dirty bomb. This statement must be thoroughly examined by corresponding international organizations. Armenian nuclear threat and blackmail must be stopped,” the head of state added.

Baku has repeatedly stated that the outdated Metsamor NPP is an open threat not only to Azerbaijan, but to the entire region, and has raised this matter at the international level. Unfortunately, the international community, especially the International Atomic Energy Agency, has not taken appropriate actions in this regard.

The first energy unit of Metsamor NPP started producing power in 1976, and the second in 1980. Although the construction of the 3rd and 4th power units of the NPP started in 1983, the process was stopped after an accident in 1986 at the Chernobyl nuclear power plant. Due to the serious crisis in Armenia, the country decided to resume the operation of the nuclear power plant in 1993, and two years later the second power unit was commissioned. Currently, only the second power unit of the NPP is operating.

Last year, Armenian officials said that they planned to extend the operating lifetime of the Metsamor nuclear power plant until 2026 but it could continue to remain operational until 2036 after modernization.

Obviously as this "live bomb" extends its lifetime, its potential threat increases and Armenia continues to threaten the region.