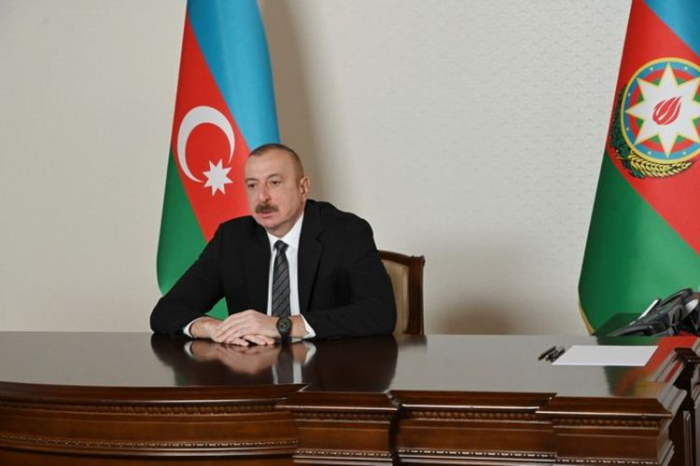 The once flourishing cities of Karabakh, Aghdam and Fuzuli, which were home to tens of thousands of people, are now in complete ruins, said Azerbaijani President Ilham Aliyev as he received in a video format Secretary General of the Cooperation Council of Turkic-Speaking States Baghdad Amreyev, AzVision.az reports.

“I know that you have visited Aghdam and Fuzuli, and seen firsthand the destruction that the occupying forces have unleashed on our cities. The once flourishing cities of Karabakh, Aghdam and Fuzuli, which were home to tens of thousands of people, are now in complete ruins. There is not a single building in Fuzuli. In Aghdam, all the buildings have also been demolished, and there is only a dilapidated mosque remaining,” the head of state said.

President Aliyev noted that foreign journalists call Aghdam a “Hiroshima of the Caucasus”.

“I think the same could be said about the city of Fuzuli, and other cities that were under occupation. Zangilan, Jabrayil and Gubadli are almost completely destroyed – not only cities but also villages. And when you drove to Fuzuli and Aghdam, you probably saw along the road the completely destroyed villages. All this destruction took place after the end of the first Karabakh war – precisely to erase traces of the Azerbaijani cultural heritage in these territories, to prevent the return of Azerbaijanis to these territories, and for purposes of pure theft and plunder,” he added.

President Aliyev emphasized that the territories that were not fully destroyed were used for a policy of artificial settlement, which represents a flagrant violation of the Geneva Conventions and is a war crime.

“As a matter of fact, whereas the former Armenian government concealed this in the early years of the occupation, the current Armenian government was proud of this and defiantly posted videos on the Internet and in the media of citizens of Middle Eastern countries of Armenian descent coming and settling down in Shusha and other cities. Thus, they completely ignored not only international legal norms but also the norms of human morality,” the head of state said.

There have been many wars and destructions in the history of mankind, said President Aliyev, adding. “But I think that the 20th century has not seen such barbarism, vandalism and destruction, a deliberate destruction of cities and villages.”