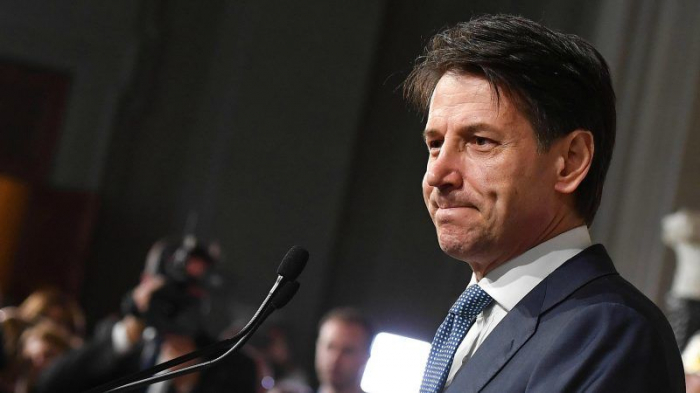 Italian Prime Minister Giuseppe Conte will hand in his resignation to the head of state on Tuesday after a morning cabinet meeting to inform his ministers, Conte’s office said, AzVision.az reports citing Reuters.

The prime minister, who has been in office since June 2018, hopes President Sergio Mattarella will give him a mandate to form a new government with broader backing in parliament, senior government sources said.

Conte lost his majority in the upper house Senate last week, when the centrist Italia Viva party led by former premier Matteo Renzi quit the coalition in a row over the government’s handling of the coronavirus crisis and economic recession.

Conte’s efforts to lure centrist and independent senators to the government’s ranks have met little success.

The cabinet is convened for 9 a.m (0800 GMT), at which Conte “will inform his ministers of his intention to resign. He will then go to see President Sergio Mattarella,” the cabinet office statement said.

Italy has had 66 governments since World War Two and administrations are regularly ripped up and then pieced back together in tortuous, behind-the-scenes talks that open the way for cabinet reshuffles and policy reviews.

However, once a prime minister resigns, there is no guarantee that a new coalition can form, and always a risk that early elections might end up as the only viable solution.

Earlier, lawmakers in the prime minister’s own coalition warned he would face defeat in parliament this week in a vote over a contested report on the justice system, which could only be averted by handing his resignation.

Conte had resisted resigning so far for fear that he might not be reappointed. Instead, he tried to draw wavering senators into his camp with vague promises of a new government pact and possible ministerial positions.

But his efforts have floundered and lawmakers from the co-ruling Democratic Party (PD) said he needed to stand down and open formal negotiations in order to win time to create a new coalition.

Trying to allay his fears of a political imbroglio, PD lawmakers said they would support him to lead a new cabinet.

Conte has no direct party affiliation but is close to the largest coalition group, the anti-establishment 5-Star Movement. It also reiterated its support for him, and has also made clear that it does want any attempt at reconciling with Renzi.

“He is a problem and cannot be part of the solution,” said Stefano Patuanelli, industry minister and a 5-Star politician.

Renzi has indicated he would return to the coalition on the condition that Conte accepts a string of demands.

If the prime minister shuns him, his path to securing a solid parliamentary majority will be more difficult, with relatively few senators seen as open to joining the government.

Looking to put pressure on waverers, the main ruling parties have warned that snap elections, two years ahead of schedule, will be the only way out of the impasse unless a solution is rapidly found.

A recent reform cut by one-third the number of parliamentary seats up for grabs at the next national ballot, meaning that many of the current lawmakers are unlikely to win re-election, whatever the result.

This means that there will be no rush in parliament for a vote, putting pressure on party leaders to find a compromise.