In Azerbaijan, Winning the War in Nagorno-Karabakh Was Easier Than Reconciling With Armenia - WSJ 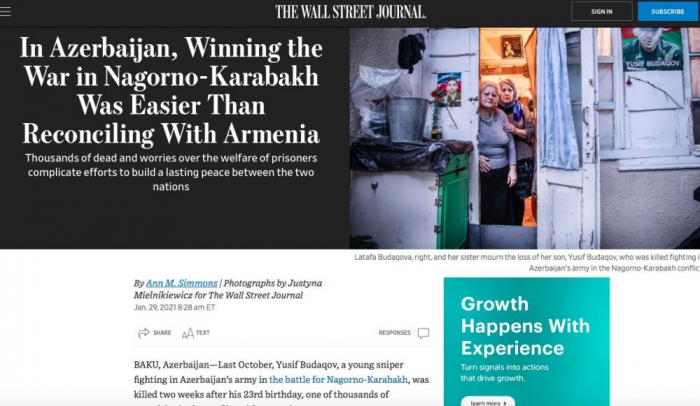 The American Wall Street Journal published an article entitled "In Azerbaijan, Winning the War in Nagorno-Karabakh Was Easier Than Reconciling With Armenia".

The article, authored by Anne Simmons, is dedicated to the Armenian-Azerbaijani conflict and the results of the recent war in which Azerbaijan managed to regain control over its territories.

But the scale of the losses on both sides and deep-seated enmity make it difficult to move on and rebuild the shattered province.

Last October, Yusif Budaqov, a young sniper fighting in Azerbaijan’s army in the battle for Nagorno-Karabakh, was killed two weeks after his 23rd birthday, one of thousands of casualties in the conflict with Armenia. His family still mourns him, plastering their home with photos of his childhood and early military days. There is little prospect of reconciling with Armenia now the fighting is over, said his mother, Latafa Budaqova. “It’s not possible,” she said. They “came to our land and our children are dead because of them.”

Nagorno-Karabakh is internationally recognized as part of Azerbaijan but was controlled by ethnic Armenians for almost three decades, author notes. Last fall, Azerbaijani forces reclaimed swaths of the territory. A subsequent truce brokered by Russia in November aimed to end the dispute.

But the scale of the losses on both sides and deep-seated enmity make it difficult to move on and rebuild the shattered province.

Some 2,855 Azerbaijani soldiers were killed during the six weeks of fighting that erupted on Sept. 27, according to the country’s Defense Ministry. More than 50 remain unaccounted for. Armenian authorities say more than 3,000 of their troops died, while the total number of civilian casualties was around 150, according to official tallies from Armenia and Azerbaijan.

Many Armenians have already called on Prime Minister Nikol Pashinyan to resign for having conceded to the truce, condemning it as an act of capitulation. Members of the Armenian diaspora in the U.S., Europe and elsewhere have warned Azerbaijan to grant equal rights and protection for Armenians who might opt to return to areas now under Azerbaijani control.

Hikmet Hajiyev, chief policy adviser to Azeri President Ilham Aliyev, acknowledged that finding common ground is challenging, but the two sides have already agreed to work together to revive Nagorno-Karabakh’s tattered economy and strengthen trade and rail links, an important component of the peace deal. The deputy prime ministers of Armenia, Azerbaijan and Russia are expected to meet in Moscow on Saturday to begin discussions. “In any military operation, winning the war is sometimes much easier than winning the peace,” Mr. Hajiyev said.

Ali Hajizade, a political analyst in Baku, said that without reconciliation between ordinary Azeris and Armenians, sustainable peace will be impossible. “This is an achievable goal, but this is not possible now,” he said.

Azerbaijan have the upper hand in the peace process. Funded in part by oil wealth, its military capability is vastly superior to that of Armenia. Reclaiming territory lost to Armenia during the collapse of the Soviet Union has long been a goal for its leaders and enthusiasm for its territorial gains in Nagorno-Karabakh is palpable.

Celebrations have spread across Azerbaijan since the truce was signed and local media still boast of its triumph. At the immigration and baggage halls at Baku’s international airport, signs hanging on walls and above passport inspection booths greet arriving passengers with the declaration: “Karabakh is ours. Karabakh is Azerbaijan.”