"We have shown to world the power of our state, indomitable spirit of our people" 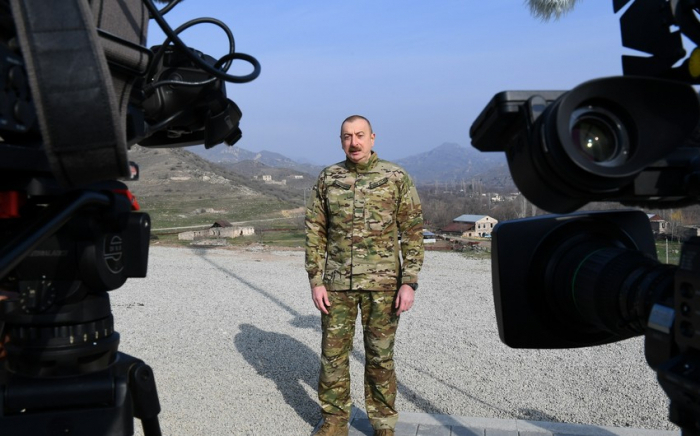 We have liberated our native lands from occupiers, drove the enemy out of our lands, and restored the territorial integrity of our country. This is the multifaceted significance of the Patriotic War. We have shown to the whole world the strength of our people and our state, the indomitable spirit of our people. At the same time, we signed important documents taking significant steps to achieve strategic goals for the future of our country.

President of Azerbaijan, Supreme Commander-in-Chief of the Armed Forces Ilham Aliyev made the remarks after raising the Azerbaijani flag in Gulabird village, Lachin district on February 14, AzVision.az reports.

"The joint statement signed on 10 November ensured the return of Lachin, Kalbajar and Aghdam districts, of course. We returned these lands without a single shot being fired. At the same time, it is this statement that secures a connection of Azerbaijan with its integral part of Nakhchivan. Also, this railway infrastructure will extend to Turkey, thus creating a second railway network connecting Azerbaijan and Turkey. Three and a half years ago, we put into operation the Baku-Tbilisi-Kars railway. This was also a historic achievement. We connected Azerbaijan and Turkey by rail for the first time in history. And now a second railway will be built and all countries of the region will be able to take advantage of it. They are very interested in the construction of this railway as well. It is possible to say that countries of our region have a positive assessment of this project," President Aliyev also added.