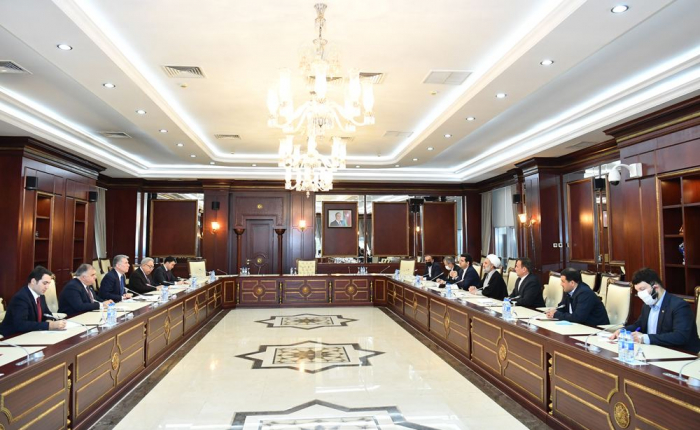 While welcoming the delegation, Asgarov said that the friendly relations established between the two countries after Azerbaijan gained independence will continue to develop.

Touching upon the relations between the parliaments of the two countries, Asgarov spoke about the importance of mutual visits and parliamentary friendship groups in the development of relations.

Asgarov stressed the need to resume mutual visits, which were postponed due to the COVID-19 pandemic, adding that joint projects serve the well-being of both peoples.

In turn, Zonnour, first of all, congratulated the Azerbaijani people on the victory in the Armenia-Azerbaijan Nagorno-Karabakh war, asked the Almighty for the repose of the souls of the martyrs and wished their families peace.

Highly appreciating the common historical and cultural values of Azerbaijan and Iran, the guest emphasized the favorable conditions and potential for the further development of relations and also stressed the important contribution that the parliaments can make in this sphere.

Touching upon the importance of joint efforts in the development of North-South and East-West corridors, Zonnour said that Iran is ready to expand cooperation with Azerbaijan in many spheres.

Asgarov stressed that the houses and facilities were greatly destructed by the Armenian side on the liberated lands of Azerbaijan during the occupation period while the restoration and development of these territories have been declared a priority by Azerbaijani President Ilham Aliyev.

Stressing that the preference is given to Iran, like other friendly countries, in the restoration of these territories, Asgarov again thanked people and leaders of Iran, who, defending justice, supported Azerbaijan in this issue.

A delegation led by Chairman of the National Security and Foreign Policy Committee of the Iranian Parliament Mujtaba Zonnour arrived in Azerbaijan, AzVision.az reports citing the Iranian Embassy in Baku.

The delegation will meet with Azerbaijani officials and MPs. Iranian parliamentarians will also visit the Nakhchivan Autonomous Republic tomorrow.