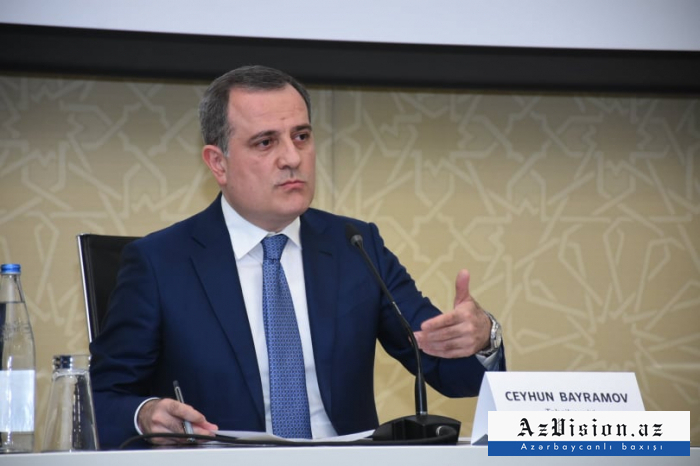 The year 2020 will be remarkable for Azerbaijan since it enters into post-conflict recovery and rehabilitation phase following the liberation of its territories from almost 30 years lasting occupation, said Foreign Minister Jeyhun Bayramov.

The minister made the remarks at the High-Level Segment of the 46th session of the UN Human Rights Council, the Foreign Ministry told AzVision.az.

He noted that having exploited the political settlement process, as well as Azerbaijan’s commitment to this process for almost 30 years, Armenia took consistent steps to consolidate the results of occupation of territories of Azerbaijan aiming at their annexation.

“This included, among others, implantation of settlers into the occupied territories, destruction, pillage and looting of historical and cultural heritage, illegal exploitation of natural resources, misappropriation of private and public property in the seized lands. Series of grave crimes have been committed by Armenia against the civilian population of Azerbaijan, as well as its cultural heritage and infrastructure throughout the years of occupation,” he said.

Minister Bayramov stressed that the recent aggression by Armenia starting from 27 September 2020 against Azerbaijan was not exclusion.

“It was accompanied by grave violations of international humanitarian law tantamount to war crimes and crimes against humanity in order to seed the panic among the civilian population of Azerbaijan. For this purpose Armenia deliberately attacked the densely populated civilian settlements of Azerbaijan located far from the conflict zone, as a result of which 101 civilians were killed more than 400 seriously injured. There have also been undeniable facts depicting a number of human rights violations by Armenian servicemen against Azerbaijani captives, including acts of humiliation and ill-treatment, such as physical assault, verbal abuse, executions through beheadings, and ill-treatment of dead bodies. Azerbaijan is determined to take all measures stemming from its rights under relevant bilateral and multilateral mechanisms to bring the perpetrators of those crimes to justice,” he added.

He said that Armenia in an open attempt to cover-up its above-mentioned wrongdoings, brazenly accuses Azerbaijan of the same with a view to diverting the attention of the international community, and to that end carries out a massive campaign of fake news.

“UN human rights mechanisms, including the OHCHR, treaty bodies and mandate holders have also been subjected by Armenia to its fake propaganda. De-occupation of territories of Azerbaijan paves the way for hundreds of thousands of displaced persons to exercise their right to safe and dignified return to their places of origin. Yet, unprecedented magnitude of destruction of public and private property, critical civilian infrastructure, including educational and medical facilities, as well as historical and cultural heritage and environment in the conflict affected territories places a huge task ahead of the Government of Azerbaijan in terms of rehabilitation and reconstruction of these territories. The Government has already initiated practical steps in order to enable safe and dignified return of the displaced population and ensure peaceful co-existence within the sovereignty and territorial integrity of Azerbaijan,” Minister Bayramov added.