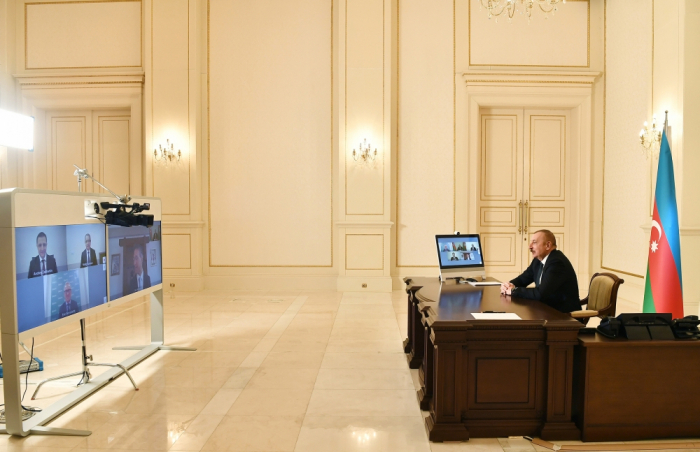 President of the Republic of Azerbaijan Ilham Aliyev has received in a video format Chief Executive Officer of Signify (formerly Philips Lighting) Eric Rondolat and other senior officials of the company, AzVision.az reports citing the Presidential press service.

President Ilham Aliyev: I am very glad to see you again. I remember our last meetings – the meeting in Davos last January, as well as the meeting organized last year in the format of a video conference. I am very pleased with the very successful continuation of cooperation between your company and partners in Azerbaijan. As we agreed in Davos, you are implementing very important projects in our country. We are fulfilling all the issues discussed and agreed. I was recently informed about the successful continuation of the street lighting project in Baku, Sumgayit and Shamakhi, about the good results and a high level of energy savings. This is very important because, as we discussed last time, the process of modernization of Azerbaijani cities continues. Therefore, as you remember, we decided to focus on the unlit streets of Baku. You have completely taken over the project in Sumgayit and Shamakhi. I am sure there will be more such cities because we are already seeing good results. We are already seeing efficiency. As we discussed last time, we can use these technologies not only in the street lighting sector, but also in other sectors – especially now, after the war of liberation, when Azerbaijan has begun the reconstruction of liberated territories where everything is destroyed. As I have said many times, we plan to create the most modern infrastructure in these territories, including the system of “smart cities” and “smart villages”. The process has already begun. Therefore, there will be a good opportunity for cooperation between our relevant agencies and international companies. So I look forward to our cooperation continuing and the first project being commissioned soon. This will be a very good indicator of our cooperation. I want to emphasize the importance of the Davos meeting not only from the point of view of discussions and the development of new ideas, but also from the point of view of establishing contacts. I am very glad to see you again.

Chief Executive Officer of Signify Eric Rondolat: We are very pleased that you, as the leader of Azerbaijan, have put an end to the conflict. The conflict does not bring anything good to anyone, and the leaders capable of resolving them are very important to us.

Conveying his congratulations on the restoration of the territorial integrity of Azerbaijan, the CEO of Signify stressed that the company was very pleased with the return by the head of state of the territories in Karabakh to Azerbaijan, because the conflict had lasted for many years.

“As a leader, you were able to find the right way out of the situation,” Eric Rondolat said and added that they had seen images of the liberated territories and the scale of the destruction there had left a mark in their hearts.

President Ilham Aliyev: Thank you. Thanks a lot for the congratulations. I believe that this really became a historic achievement not only for Azerbaijan but also for the entire region, because the region has good opportunities for full integration now.

The head of state said that the settlement of the conflict had ushered new opportunities for all countries in the region. Noting that these territories had been completely destroyed by the Armenians during the occupation, President Ilham Aliyev stressed that Azerbaijan had already started projects in these territories related to the production of electricity, the construction of roads and railways.

Referring to the projects being implemented in Azerbaijan by Signify, President Ilham Aliyev said:

- I think that the Baku, Sumgayit, Shamakhi projects demonstrate excellent activity and efficiency of your company. We have new plans. We have already discussed these plans in connection with other large cities and, of course, the territories liberated from occupation. We are preparing a master plan for the reconstruction of each city, and street lighting will become an important part of it.