Return to Karabakh after the war – Spanish newspaper 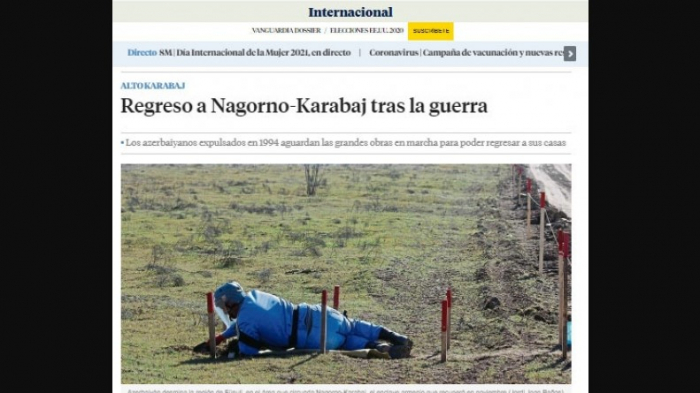 Journalists, who attended the February 26 press conference of Azerbaijani President Ilham Aliyev for local and foreign media representatives, continue to cover the realities of the country.

These journalists also visited the liberated Azerbaijani lands to witness the Armenian atrocities and thoroughly informed the world community about it.

The article by Jordi Joan Baños says the Azerbaijanis displaced from their native lands are awaiting the completion of large-scale reconstruction work to return home.

“Hundreds of thousands of internally displaced people are looking forward to returning to Karabakh – the lands that once theirs – after 30 years of longing. What hastened them there is the desire to completely rebuild their ancestral homes, with the exception of 3-4 walls. However, the Azerbaijani state, first of all, must clear thousands of kilometers of areas of mines. Mines are everywhere. Armenia refuses to provide a map of the mined areas to Azerbaijan and claims that there is no such map,” the article notes.

The author also points out the ongoing construction of the first power plant in the liberated lands and an international airport in liberated Fuzuli.

He stresses that large-scale work is now underway in these areas, where some time ago there were only ruins and traces of war.

“The airport under construction in Fuzuli will be one of largest airports in Azerbaijan,” Baños cites a representative of Azerbaijan’s national air carrier AZAL, as saying.

Boards bearing the Azerbaijani and Turkish flags, which were set up in the liberated Boyuk Taghlar village of Khojavend district, attract attention, he writes.

“Azerbaijanis forcibly relocated from these territories can now return. Their homes were occupied by Armenians resettled from Syria and Lebanon,” the author quotes a tour guide, who lived in Aghdam until the age of 14 and was disappointed at the entrance of the city, which was populated predominantly by Azerbaijanis until the early 1990s, as saying.

“The village of Boyuk Taglar is also known for the oldest caves in Eurasia. The road to victory is the road to Shusha, an unusual city for Azerbaijanis,” the article reads.

The article also highlights the 29th anniversary of the Khojaly genocide. “Azerbaijan has recently commemorated the Khojaly tragedy of 26 February 1992 – the bloodiest and most brutal page of the war. Twenty-nine years ago, the town of Khojaly, predominantly populated by Azerbaijanis, was subjected to ethnic cleansing. One in 10 people was killed.”

“The perpetrators of the Khojaly tragedy must be held accountable. For this reason, not only peace but also justice is important as in the Balkans, Sierra Leone, or Rwanda. The impunity of all perpetrators led to the Armenian bombing of civilians in Azerbaijan’s Ganja city,” Farid Shafiyev, Chairman of the Baku-based Center of Analysis of International Relations (AIR Center) told the author.

Samira Huseynova, who became an IDP at the age of five, believes that stability will fully exist only if justice prevails.

The full implementation of restoration work in the Karabakh region is limited by landmines, according to the author.

Baños also emphasizes the great importance of the Victory road to Shusha, which is under construction.

“Undoubtedly, Azerbaijan has liberated the most beautiful corner of its territory. These lands are the places where the ancestors of Azerbaijan were buried and their childhood dreams await them,” he adds.