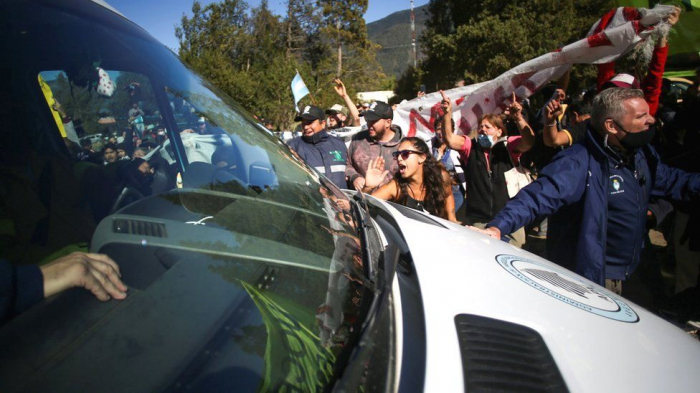 Crowds gathered around Mr Fernández and threw stones and punched his vehicle outside a community centre in the southern province of Chubut.

The president was visiting an area devastated by forest fires, which have killed one person and injured others.

But the protest was against plans to resume open-pit mining in Chubut.
The demonstrators were angry at government proposals to allow large-scale projects to begin again in the region, which is rich in gold, silver and uranium, Clarín newspaper reported.

Footage of the attack shows people gathered at the entrance of the community centre as Mr Fernández is led out towards his vehicle.

The crowd then follows the president and starts punching and kicking the minibus, hitting the windows with stones and attempting to prevent it from moving.

When the vehicle eventually passes through the crowd to leave, a number of windows appear to have been broken.

President Fernández later sought to downplay the violence, saying he believed it was the work of a small number of people who hardly had any support in Chubut or across Argentina.

Forest fires have blazed through Argentina's Patagonia region in recent days, forcing people to evacuate the area and destroying at least 200 homes.

Some towns have suffered power outages and others have been left without a water supply.

The cause of the fires has yet to be established, but Argentina's interior ministry has said it believes many were started intentionally.