The Telegraph: Azerbaijan – the fascinating country you never thought to visit 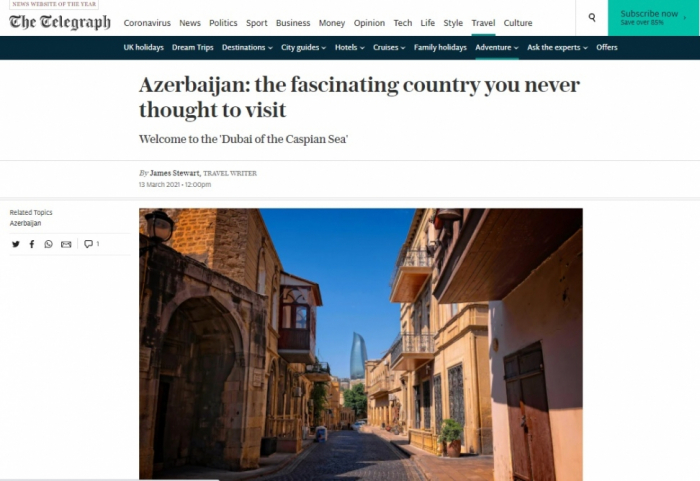 Calling Baku the ‘Dubai of the Caspian Sea’, the author said Azerbaijan, known as “Land of Fire”, is the most interesting country in the Caucasus. “Although Georgia has become one of the tourist destinations, Azerbaijan is more attractive,” he noted.

The author also shared his impressions of Azerbaijan’s Sheki district.

“Sheki is in the foothills of the Caucasus Mountains, a five-hour drive west of Baku. Beyond the capital, the desert ends abruptly and you are rolling past wooded hills and vineyards and blokes scything rhythmically in fields,” Stewart wrote.

In July 2019, Sheki won World Heritage status for its “tangible Silk Road heritage”, he said, adding. “In the cool water garden of an old caravanserai, I sit beneath arcades where merchants once bartered for metalwork, ceramics and silks.

The traveler said he also visited the Palace of Sheki Khans.

“For a change of scene I walk three miles to Kish village. As Sheki falls behind, woods take over, dotted here and there with former dachas. Kish is the real deal, with cockerels strutting along rough-cobbled lanes. On the main square stands a bust of Thor Heyerdahl. The Norwegian adventurer has a cult following in Azerbaijan having funded the restoration of Kish’s first-century church, the country’s oldest,” he added.

The author said at the church, an attendant showed him two skeletons. “You see?” he asks pointing into the crypt. “They’re giants.”

Stewart said throughout his time in Sheki, people mentioned Guba district. The author headed to Guba after returning to Baku.

He spoke about the beauty of the village of Khinalig in Guba, emphasizing that it resembles the places mentioned in the Bible. The author noted that in this village, located in one of the most remote areas of Azerbaijan, it is possible to hear the sound of a river flowing through the bottom of the mountain.

He noted that in this village, located in one of the most remote areas of Azerbaijan, it is possible to hear the sound of a river flowing through the bottom of the mountain.

Stewart went on to say that the road to the village of Khinalig, where people have their own way of life, was built in line with modern standards.

“When I drop into Galaykhudat village, after a few hours a man invites me for mountain-thyme tea. He tells me about a fortress of the Guba Khans that had controlled this ancient trade route and of a fire temple recently rebuilt in the Shahdag National Park.”

“Yet change may be coming. The Azerbaijani government is keen to promote Khinaliq. It has plans to transform my walking route into a tourist drive. Another project would create the world’s longest cable car from Khinaliq to Qabala ski resort,” he concluded.