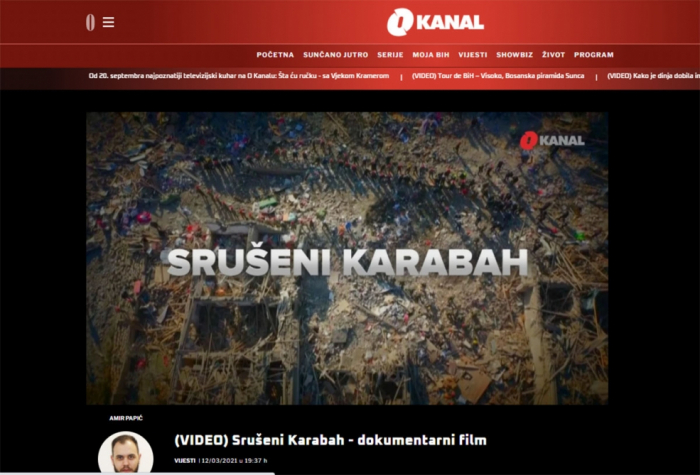 O Kanal, a famous TV channel operating in Bosnia and Herzegovina, aired a story on the Second Karabakh War.

The story prepared by journalists Andi Mioč and Mirza Adzemovic noted that the war in Karabakh ended about three months ago.

The journalists said the city of Aghdam, located 350 km away capital Baku, has almost been ruined.

“Before the First Karabakh War in the 1990s, Aghdam was home to about 40,000 people. In 1993, Armenian separatists invaded Aghdam, forcing the entire population to leave the city. They destroyed almost all the city to prevent the people’s return,” the story said.

The O Kanal journalists stressed that after 30 years of occupation, Azerbaijan liberated most of other territories occupied in the 1990s, including Aghdam.

“The war broke out again in September 2020 and lasted 44 days. As a result, Armenians left the Azerbaijani territories under an agreement brokered by Russia in November,” they added.

The authors also spoke about their visit to Azerbaijan’s Zangilan and Jabrayil districts liberated from the Armenian occupation.

The story further highlighted an act of genocide perpetrated in the Azerbaijani town of Khojaly by Armenians on February 26, 1992, the consequences of the Armenian occupation, as well as the war crimes committed by the Armenian military during the Second Karabakh War and the missile attack on Ganja, Azerbaijan’s second largest city.