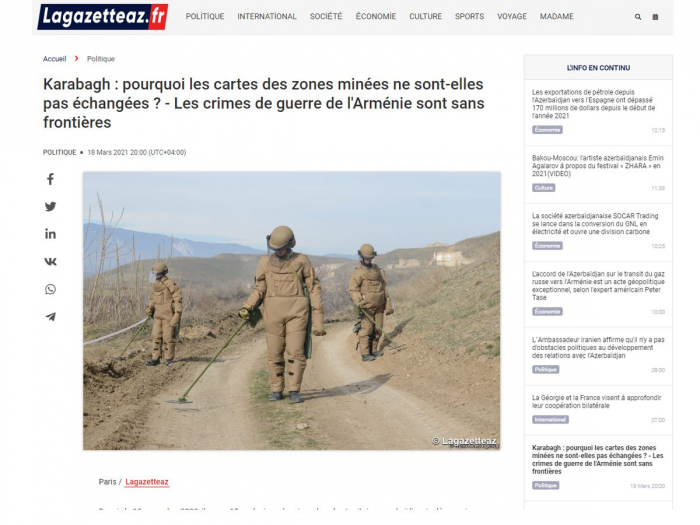 The French "lagazetteaz.fr" online newspaper published an article entitled "Karabakh: Why the map of minefields is not given? - Armenia's war crimes have no limits", AzVision.az reports citing the French online newspaper.

“From November 10, 2020 up till now, 15 cases related to the explosion of mines have occurred in the Azerbaijani lands liberated from the Armenian occupation,” the article said. “Some 30 civilians suffered as a result of the mine explosions, 14 of them were killed, 16 were wounded.”

"The fact that so many civilians suffered as a result of the mine explosion four months after the end of the war worries Azerbaijan and many countries,” the article said. “However, Armenia does not provide Azerbaijan with a map of minefields.”

“Despite the numerous calls from the countries in this regard, there is no direct pressure on Armenia,” the article said. “International organizations, like before the second Armenia-Azerbaijan Nagorno-Karabakh war, remain silent. As a result, Armenia continues to commit war crimes."

“Armenia's concealment of the minefield maps impedes peace, contradicts all international laws and principles and is considered a war crime,” the article said.

“As opposed to Armenia, Azerbaijan fully complies with the agreement signed on November 10, 2020 [on ceasefire and cessation of all hostilities in the Nagorno-Karabakh region] demonstrates humanism, for example, the Armenian side at its request was provided with additional 10 days to leave Kalbajar district,” the article said.

“However, Azerbaijan does not see humane steps from Armenia, which is doing the opposite, hiding the map of minefields, which resulted in the death of more people and trying to delay the restoration of the liberated territories,” the article said.

The article also contains the words of the president of Azerbaijan in this regard, voiced at a press conference for local and foreign journalists on February 26, in particular, there is a quote made by the president.

"Not to give us maps of minefields means dooming civilians and military personnel to deliberate death and injury,” the article said, quoting the president. “What kind of cooperation can we talk about? In this case, cooperation cannot be one-sided."

The article tells about the publications of military experts and materials about the war crimes of Armenia, published in foreign media.

“Both experts and media outlets stress that Armenia must provide Azerbaijan with a map of minefields, otherwise it is considered a war crime,” the article said.

“The world community - international organizations and influential countries must exert concrete pressure on Armenia or impose sanctions against it,” the article said. “Otherwise, the lives of dozens of innocent civilians will remain at risk.”