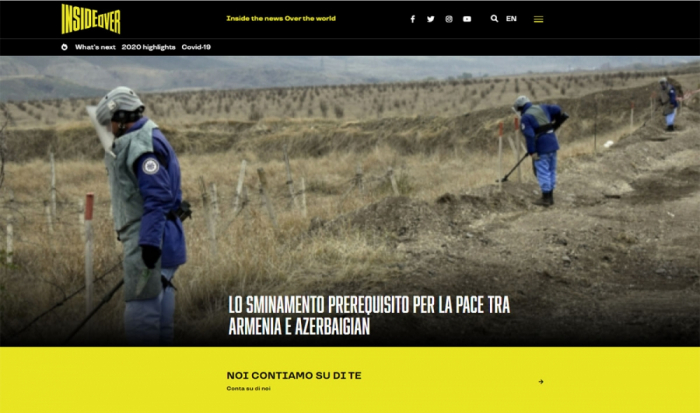 InsideOver analytical portal, a special edition of influential Italian newspaper Il Giornale, has published an article entitled “Demining of territories is a prerequisite for peace between Armenia and Azerbaijan.”

The article by Italian journalist Emanuel Pietrobon highlights that the end of the Second Karabakh War in November 2020 allowed Azerbaijan to regain its sovereignty over the territories occupied by Armenia for almost 30 years, and for the first time since 1992, Novruz festivities were held in the city of Shusha.

The author stresses that immediately after the war, which resulted in the liberation of Azerbaijani territories occupied in the early 1990s, President Ilham Aliyev set a roadmap for the restoration of the liberated territories and transport infrastructure connecting Nakhchivan with the main part of Azerbaijan.

The Italian journalist noted that the Armenian leadership is deliberately delaying the establishment of the Zangazur corridor in order to prevent the restoration of transport links between Nakhchivan and the main part of Azerbaijan and ignoring cooperation on fundamental issues such as the demining of territories important for the implementation of planned projects.

“More than three months have passed since the end of the Second Karabakh War, however, Armenia has not yet provided the minefield maps to Azerbaijan. Such a move by Armenia leads to serious consequences for both Azerbaijan and Russia. To date, over 17,000 explosives have been neutralized in Karabakh, but there have been deaths and injuries among Russian peacekeepers during demining operations,” Pietrobon adds.

The journalist also underlines that mine explosions have claimed the lives of 12 Azerbaijani civilians and left 14 others injured since December 2020.

He adds that Azerbaijani civil society representatives have already appealed to the world community, international organizations, including the UN Secretary General, the UN Human Rights Council, the Council Europe and the European Union, demanding pressure on Armenia to provide minefield maps.

Pietrobon stresses that Italy, which is actively involved in the restoration of the liberated Nagorno-Karabakh and is a key partner of Azerbaijan in many spheres, was not indifferent to the latter’s appeals.

The journalist also recalls that on March 2, the Standing Committee on Foreign Affairs of the Italian Chamber of Deputies passed a resolution welcoming Baku’s full compliance with the statement of November 9, 2020 [on the end of hostilities in Nagorno-Karabakh] and urging Yerevan to take constructive steps in order for peace to be ensured and for civilians to be protected.