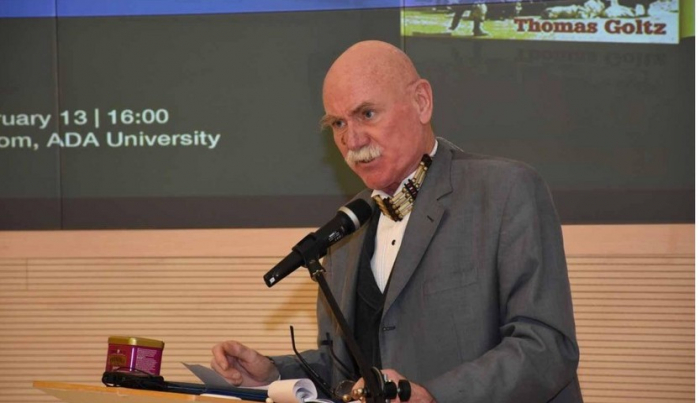 "I feel deep sorrow for the Azerbaijanis who fell victim to landmines in the lands liberated after the Second Karabakh War," a well-known US investigative journalist, academician Thomas Goltz told reporters, AzVision.az reports citing Report.

Goltz said that he learned how deplorable the situation was after looking at the International Committee of the Red Cross reports on innocent people killed by landmines in the territories liberated by Azerbaijan.

"Let's look at the issue from two different perspectives. Who are the fighters in the war? When do mines target the civilians? The answer to the first question is clear, but relevant international organizations have proposed various solutions for the second question. From the marking of unsystematically buried mines (provided they are withdrawn towards the end of wars) to self-deactivating mines" ceases to work after a given period (2-3 months). Although research by these international organizations has shown that a ban on all types of landmines in wartime is the most effective option, it would be naive to expect it to happen in the near future," Goltz said.

The investigative journalist stressed that the Armenians, as always, claim that the Karabakh Armenians are responsible for burying mines and handing over their maps to Azerbaijan.

Considering the chaos observed in the Armenian army during the war, Goltz believes that the existence of all the maps where mines are buried does not seem realistic. He also emphasized the need for assessment within the framework of international law.